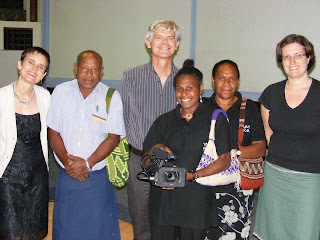 A film screening of Australian and Papua New Guinean short films last week, as part of the Australia Week celebrations in , was deemed a success.

The Papua New Guinean short films shown at the screening were those produced by the Yumi Piksa team last year at the .

The films which have been shown in , and on CNN () were premiered at the to both students and the public for Australia Week.

Audiences were welcomed to the screening on the night by Australian High Commissioner His Excellency Ian Kemish.

Deputy Head of AusAID PNG Ms Margaret Calla also spoke on the night emphasising the importance of short films and the continued support given to filmmakers in PNG by AusAID.

Australia Network was also present on the night and presenter Tania Nugent invited Yumi Piksa members attending the event to share their experiences with the audience.

Verena Thomas, facilitator of the workshop, Klinit Barry and Stella Lukula participants and emerging filmmakers emphasised the importance of working with the communities when making films in the .

For Yumi Piksa, as Klinit Barry said: “It is important to speak the same language as the community and develop trusting relationships with the people in order to develop engaging and meaningful films.”

The other highlight of the evening was the launching of the Komuniti Tok Piksa project based at the .

Mr Wep Kanawi of the National Aids Council Secretariat (NACS) officially launched the project and explained that it would be about using filmmaking in communities as a way to create more dialogue in PNG about HIV and AIDS issues.

Mr Kanawi stated that: “The Yumi Piksa films are real stories, about real people in real situations in real PNG. Papua New Guineans love storytelling and conversations that last a long time in their minds and more so in their hearts.”

NACS is a supporting partner of Komuniti Tok Piksa in collaboration with AusAID for the next 18 months.

The Australia Network will also work with Komuniti Tok Piksa this week to feature the project in an episode of its television program Pacific Pulse.

The short film screening of Australian and Papua New Guinean productions demonstrated how the medium of film is able to connect people from different nations, and how it strengthens the ties between and PNG through the sharing and understanding of our stories.

The Komuniti Tok Piksa project is a collaboration between the of and the University of Technology (UTS) .

Lead investigator is Professor Rick Iedema from UTS who is experienced in video communication for health communication and social change.

As part of the project, student and staff researchers from UOG will be trained to use video cameras to undertake research and to record community stories about HIV and AIDS in an effort to reduce stigma and to better understand its impact on local communities.