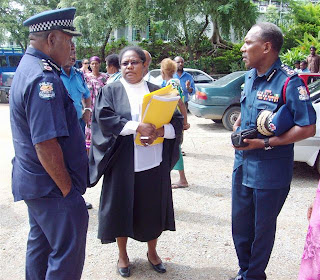 Caption: Mr Baki (right) talking to private lawyer Jacinta Murray outside the premises yesterday after his request for a judicial review was deferred to April 15 for substantive hearing. With them, at left, is assistant commissioner for investigations, Raphael Huafolo.

The move by the head of the police hierarchy came days after a bench warrant was issued for his arrest after failing to appear in court on numerous occasions to answer contempt charges taken out by Mr Wagambie on allegations of defying a National Court order last year to install him as acting deputy police commissioner operations.

Although Mr Wagambie is now on the job he was fighting for, he still pursued the contempt charges against Mr Baki because of the long delay and failure to attend court and act on court orders.

Cabinet’s appointment of Mr Wagambie as acting deputy police commissioner operations was gazetted last March 27 but was not effected until recently while the contempt charges against Mr Baki were pending in court.

Mr Baki voluntarily appeared in court on Monday and the bench warrant was set aside.

He was put on bail.

In a new twist of events yesterday, Mr Baki appeared before judge Justice Ambeng Kandakasi along with private lawyer Jacinta Murray of Murray Lawyers, foregoing State lawyers, to seek a judicial review of the NEC decision.

However, Justice Kandakasi ruled in court yesterday that the application for review was related to the same issue that had led to the contempt proceedings.

As such, he said the matter would be discussed at the substantive hearing, slated for April 15.

He said the contempt proceedings had to be dealt with before other matters.

Also this week, former deputy police commissioner Geoffrey Vaki, who was sidelined on allegations of abusing a woman, was recalled to his position.

Media reports said a minute, dated March 12, from Mr Baki to Mr Vaki directed that the latter take up the job no later than 8am on Monday, March 15.