Momis signs up to vie for presidency 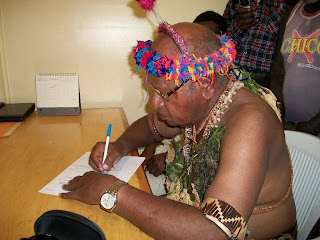 He was accompanied by a huge crowd of supporters which included the sacred UPE group from Wakunai.

Mr Momis will lead the New Bougainville Party in this coming election.

The other three presidential candidates who have nominated are current President James Tanis, Ruben Siara and a woman candidate, Magdalen Toroansi.

Mr Tanis was the first to nominate following the issuing of writs last Friday. He started his campaigning at Gogohe at the weekend and is now in Arawa.