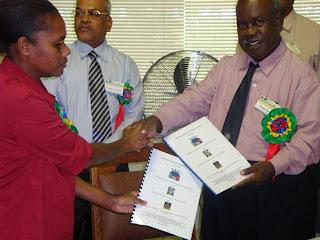 Caption:  parliamentary secretary with Ministry of Agriculture and Livestock, Edward Kingmele, exchanging notes with CEOs of Vanuatu Agriculture Research and Technical Centre and PNG’s NARI after signing an MOU for the NARI-EU-ACP S&T Programme

Story and picture by JOSEPHINE YAGA of NARI

Agriculture staff in are in dire need of capacity building in various areas in agricultural research and development to carry out their mandates effectively and efficiently, according to Edward Kingmele, parliamentary secretary with the Ministry of Agriculture and Livestock (MAL) there.

He, however, said the new sub-regional programme on capacity building for the three Western Pacific countries - , PNG and - would now address that capacity.

“Thus, it is a superb achievement by PNG National Agriculture Research Institute, MAL of Solomon Islands and the Vanuatu Agriculture Research and Technical Centre (VARTC) to win funding for three-capacity development projects in this highly-competitive call from European Union (EU) to the African Caribbean and Pacific (ACP) group of states which will benefit researchers in our countries,” Mr Kingmele said.

He said this during the launch of an ACP science and technology programme on capacity building at the Sir Alkan Tololo Research Centre in Lae recently.

He was among stakeholders from key government and non-government agencies from , and PNG who witnessed this milestone development.

Mr Kingmele added that agriculture was the backbone of as it was the major productive sector, but following the crises in 2000, agricultural research and development in was crippled in terms of both research and human capacities.

During the launch, programme partners NARI, MAL and VARTC signed a memorandum of understanding to work together in the programme over the next three years.

“The signing ceremony of the MOU between the three countries signifies a milestone in the move that and government are embarking on - having serious partnership arrangements with the regional organisations such as NARI and other lead agriculture bodies in PNG,” Mr Kingmele said.

“This partnership connects us to various international institutions and organisations elsewhere towards further development of the agriculture sectors in the two countries.”

The ACP S&T programme, totaling K11.5 million, is an ACP EU co-operation programme aimed at supporting ACP countries in formulating and implementing science and technology policies that can lead to sustainable development and poverty reduction through economic growth and progressive integration in the world economy.

The specific purpose of the programme is to strengthen the internal science and technology capacity of ACP countries to support research development and innovations in the ACP region at institutional (administrative and policy making), academic (research and technology) and civil society (business) level.

The programme will be implemented in the three Western Pacific countries involving nine different organisations.