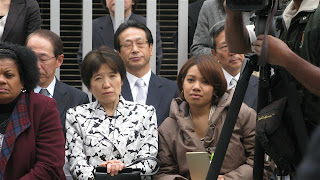 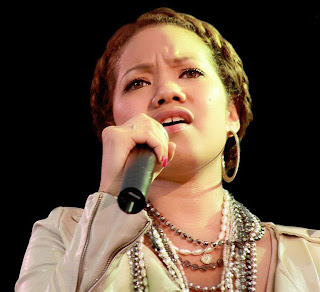 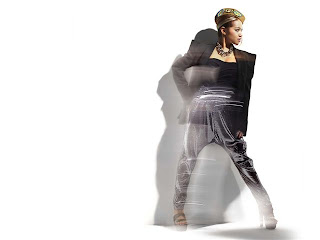 Captions: 1.  Emi Maria (right), the Papua New Guinea-Japan beauty who is now a sensation in Japan, and who gave a rendition of the PNG national anthem at the opening, at the PNG Embassy opening in Tokyo last Wednesday. – Picture by YAWI NALU KWAMSE 2. Emi Maria performing at the Hibiki Music Festival 2009 3. Emi Maria as she appears on the home page of her website http://www.emimaria.com/

She is arguably ’s biggest export to and one of the biggest R & B recording artists there right now.

Twenty-two year-old Emi Maria, a PNG-born beauty who is a superstar in right now, gave a soulful rendition of the PNG national anthem at the opening of the new PNG Embassy building in last Wednesday.

She touched the hearts of members of the large PNG entourage that was in last week, especially when they found that she is Papua New Guinean.

“She sang the national anthem so beautifully and made us so emotional, especially when we found out that she is part Papua New Guinean,” said Timon Tomala, leader of a Morobe dance troupe that performed in last week.

Her father is Papua New Guinean, from Simbu province, while her mother is Japanese.

She spent the first five years of her life in , before moving to in .

She first started listening to R&B at six due to her sister, listening to such artists as Janet and Michael Jackson, and K-Ci & JoJo, according to a brief biography published online.

By high school, she had started writing music and producing her own tracks.

She participated in the MTV Star Tour, and started performing lives in the Kansai area from 2006 onwards.

In 2007, she started appearing on many different Japanese urban artists' albums as a guest artist, such as Seeda and MC Moggy.

In 2007, Emi Maria released her first EP, "Between the Music," under Freest Inc., a label Emi Maria had created for herself.

Her debut single "I Gotta (Summer Kiss)" was picked as the iTunes single of the week in August 2008.

She debuted as a major label artist in 2009, with the release of a digital dingle "One Way Love" under Victor Entertainment.

During this time, she had some of her highest profile collaborations.

"Luv Is..." was a song Emi Maria performed with R&B singer Jay'ed, which features on his top 10 album Musication.

Last December, she had her first top 10 hit, as a featured artist on Seeda's single "Wisdom," which reached #8 on the Oricon singles charts.

After the release of her first physical single in 2010, "Show Me Your Love," Emi Maria released her first major label album, Contrast.

More information can be sourced from her website http://www.emimaria.com/.