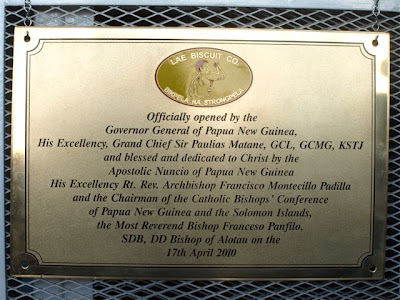 The plaque which was unveiled by Governor General Sir Paulias Matane when opening the Lae Biscuit Company factory. 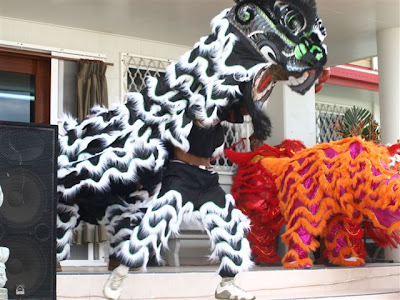 A Chinese dragon dance being performed at the opening of the Lae Biscuit Company factory. 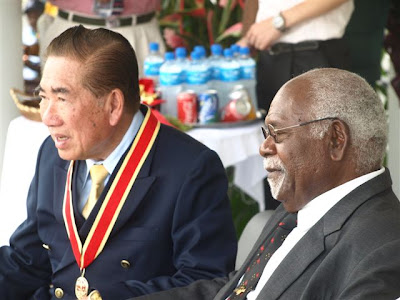 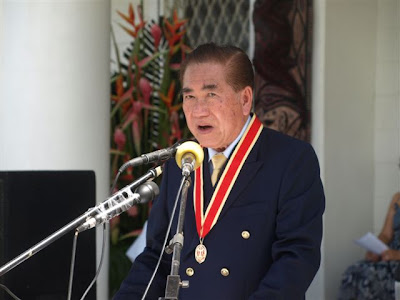 Sir Henry addresses guests at the opening of his new factory. 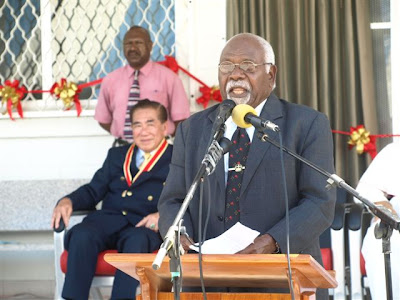 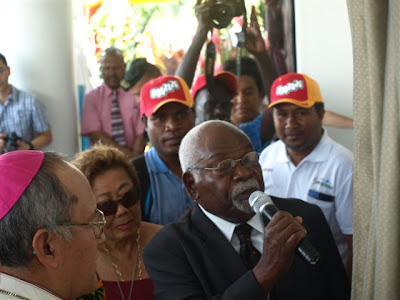 Governor General Sir Paulias Matane opens the new Lae Biscuit Company factory at Kamkung in Lae on Saturday.-Pictures by GABRIEL LAHOC
Governor General Sir Paulias Matane has paid tribute to Lae Biscuit Company founder Sir Henry Chow and his family on their long and faithful contribution to Papua New Guinea over the years.
Sir Paulias made the tribute when opening the magnificent new K65 million Lae Biscuit Company at Kamkumung in Lae in front of hundreds of people from both PNG and overseas on Saturday.
The Governor General, in his speech, concentrated on Sir Henry and the Chow family’s contribution to PNG since its grandfather arrived at Kokopo as a coolie laborer under the German administration in 1895.
“The forefathers of the Chow family were peasant sharecrop farmers from Kaiping County, Guandong province, Southern China,” Sir Paulias said.
“One male member was recruited by the New Guinea German colonial government as a personal servant for one of its administration officers at Rabaul in 1895.
“Two younger brothers followed and settled in Rabaul.
“The Chow family now has six generations in Papua New Guinea.
“The family became part and parcel of the history and development of East New Britain and New Ireland provinces.
“Members of each generation have been active in community affairs and contributed much to the development and advancement of the two provinces.”
Sir Henry said that to have achieved and completed the brand-new facility, the biggest stand-alone biscuit-making factory in the Southern Hemisphere, needed the support of many people and friends.
“To have come this far, it had taken us 52 years of sweat, toil and hard work, and on the way we had experienced failures, discouragement and many hurdles,” he said.
“It had not been a fair sailing all the way, and with determination and willpower, especially with the help of my good wife Lady Colette, we managed to come this far.
“So they say that a successful man, there is always a woman behind him, so my friends, Lady Colette is really claiming the credit today.
“She did produce seven childen for me, five boys and two daughters.
“On their return to Papua New Guinea after their education in Australia, all our five sons had worked for Lae Biscuit Company, and they had contributed to the growth, expansion and success of the company today.
“They brought with them fresh ideas and innovation on how to manage and operate the company, even though they were not totally agreeable with me.”
An emotional Sir Henry passed the rein on to his fourth son, Ian Andrew Chow, to be the new managing director of Lae Biscuit Company.
Invited guests were entertained by singsing groups as well as a Chinese dragon dance and firecrackers, before being treated to a big party at the factory site.
The new factory will provide employment to some 450 people and with some of the best-working conditions and remuneration packages in PNG.
It is a massive vote-of-confidence in Lae, Morobe province and PNG by a Chinese family which has come to call the country ‘home’.
The buildings and whole facility consist of a main factory building which is 204 metres long, administration building, staff facility building, workshop building, emergency generating set building and guard house building.
The two biscuit-making lines are installed in the main factory building and the administration building will accommodate administration, planning, accounting and marketing.
The staff facility building has a fully-equipped kitchen and a large dining room which can prepare and provide meals and caters for 200 persons at one seating.
Lae Biscuit Company will provide meals to all staff at no cost to them.
Ablution and laundry facilities are up to international standards for a food-manufacturing facility.
Posted by Malum Nalu at 4/18/2010 09:24:00 PM