'Women must blame themselves for lack of development' 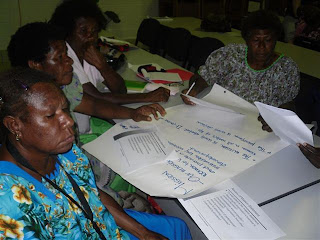 By JOSEPHINE YAGA of NARI

Issues hampering the development of Papua New Guinea women rest within themselves, according to food technologist Dr Jane Ravusiro.

She said women cried for equality and respect from male counterparts, and yet, they lacked co-operation, respect and most importantly the determination to support and push women issues to another level.

“Gossiping about and discouraging ourselves is prevalent,” Dr Ravusiro said.

Dr Ravusiro, a food technologist with the PNG Cocoa Coconut Institute, highlighted this during the PNG Women in Agriculture Development Foundation roundtable talk at Bubia in Lae recently.

‘To empower the 90% of PNG women in rural areas, we need good teamwork with positive attitudes with respect for each others’ opinions,” she said.

“Only than will women’s voices become strong and men will realise that rural women are a great force with a voice contributing to the development of this country.

“Let us not blame men for our weaknesses.

“We should appreciate their support since most men are not as bad as many women would think.

“Most men are understandable and respectful and without them we would miss this forum.”

Dr Ravusiro was speaking to about 23 registered groups and 12 associate members of PNGWiADF, covering 13 provinces and representing 3,000 women networks, who participated in the forum.

The women shared a strong commitment to make a difference in their agricultural practices and wellbeing through knowledge sharing and information exchange, training and practical support.

With the theme ‘Recognising Women’s Agricultural Innovations through Dialogue’, the forum was an initiative of the PNGWiADF to gain recognition of its role as the voice of women in agriculture.

The objective of the forum was for PNGWiADF to bring rural women’s voice to the attention of key stakeholders, donor partners and line government agencies which participated and collectively develop a strategic plan for women in agriculture.

The success of achievements of PNGWiADF has been through effective partnerships and relationships it has established through building trust with its partners within the country and internationally.

President of PNGWiADF, Maria Linibi said, the relationship and trust of these organisations and individuals has enabled the organisation to set the foundation for a new era in the development outcomes for the rural majority.