Agriculture training for mine impact students 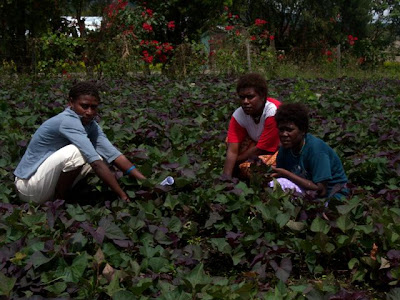 Hellen Komkombe, Carolyne Tambarie and Emma Apool attend to the kaukau plot during one of their practical sessions 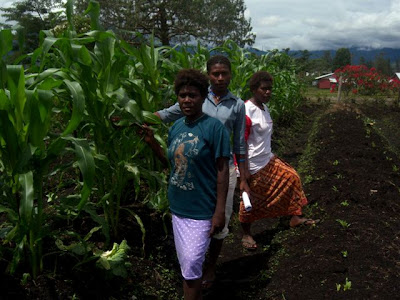 
By SOLDIER BURUKA of DAL
A group of young people from faraway New Ireland province are making use of their time at the Highlands Agricultural College in Mount Hagen.
The 10 students from the Lihir gold mine area are studying basic agriculture farming and are pleased with their own efforts so far.
Four of them are females who are Grade Eight school leavers and six are males, of whom four are Grade 10 leavers and two are Grade Eight leavers.
With them is another female, a Grade 10 leaver who is doing her second year.
The students are thankful to their sponsor, Lihir Sustainable Development Organisation, for recognising the importance of promoting agriculture in the mine impact areas on the island and encouraging school leavers to be trained in basic agriculture farming.
The 10 students enrolled in the six-month agriculture training program in February this year.
They said that landowners in the past concentrated mainly on mine-related activities, but were now realising that mineral resources were only for the short-term and that agriculture remained as the backbone of the economy and the people’s livelihood.
With that in mind, the landowner company took the important step and sponsored the group to be trained at the Department of Agriculture and Livestock-operated agricultural college.
Although far away from their island community, the Lihir students are now used to the cold climate and have settled in well and concentrating on their certificate in agriculture farming course which covers crop production, livestock production (including piggery, poultry, small ruminants and cattle), rural life development, project management and communications.
The group will graduate next month.
The students said they were aware of the mine impact on the people’s lives and realised that such major development also had its disadvantages.
Because of the people’s concerns for their future livelihood, the landowner company placed its trust in its young people and wanted them to be trained as agriculture workers so that they could promote and create awareness on agriculture rehabilitation and expansion.
The company has its hopes pinned on the school leavers to create opportunities in agriculture farming for the mine impact communities.
The students upon their return will also look at potential crops like coffee, aquaculture and vegetable production on a bigger scale.
“As school-leavers we realise that the only way to help our people is to teach them about agriculture farming,” they said.
“We also realise that often many students think of getting office jobs or going to universities, but we must think about helping our own community at the grassroots level.
“It is our duty to help the people who have been affected by the mine development in the past couple of years to resettle and participate in meaningful agriculture activities.”
Another group of students from the Porgera gold mine impact areas in Enga province, sponsored by their MP Philip Kikala, is also studying at the college.
Posted by Malum Nalu at 5/13/2010 12:00:00 AM