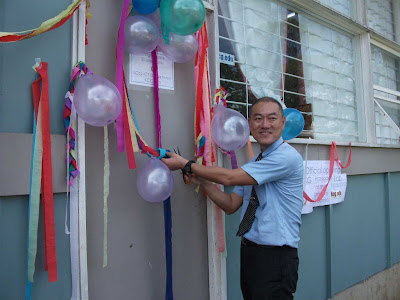 
By KATE GUNN of UOG

Monday, May 10, 2010 saw the official opening of a new computer laboratory for post-graduate students at the .

A total of 53 computers and 32 flat screen monitors were donated by the International Development for Computer Education (IDCE) and the Kyoto Computer Gakuin (school) in .

Sixteen of these are being used for the post-graduate students’ computer laboratory at the UOG, now officially named the KCG Lab after the Kyoto Computer Gakuin who not only helped to procure the donated computers and flat screen monitors but prioritised the UOG’s request for the items.

Acting Vice Chancellor of the UOG David Avei-Hosea commented at the opening that UOG had received many benefits over the years from JICA’s support in the areas of volunteering, infrastructure, language, culture and computers.

In a formal ceremony held on campus, the KCG Lab was officially opened by Mr Takeshi Shiratsuki co-ordinator of Japan International Co-operation Agency (JICA) programme in .

Mr Shiratsuki said the occasion was a good way to acknowledge each other, make new relationships and also to develop PNG more.

Mr Shiratsuki asked those present to continue to support the JICA volunteer programme.

The new KCG computer laboratory will now help to ease the problem of access to computers and the Internet for UOG post-graduate students on campus.