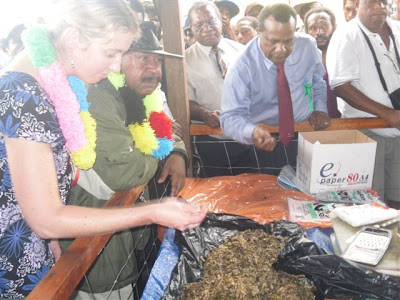 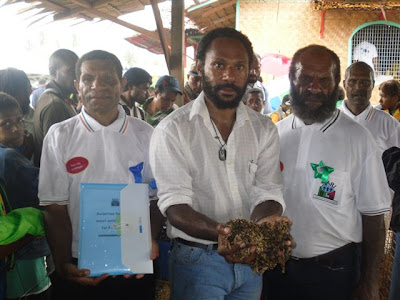 In traditional society, particularly in the , pigs are a sign of wealth, and a man with no pigs is seen as a “poor man”, a “nobody”.

Pigs are an essential commodity in feasts, bride price, funerals, compensation ceremonies, and many, many more.

Moreover, the bigger and fatter the big, the more the status of the owner, hence, pigs must be well fed rather than let around to feed on scraps and litter from the village.

In the Highlands, particularly the high-altitude areas such as Tambul in the Western Highlands and Sirunki in Enga, frosts are a common event and affect pig feed such as kaukau (sweet potatoes).

To overcome this, the National Agriculture Research institute (NARI) at Bubia outside Lae, on Wednesday this week launched its kaukau silage project at its Agricultural Innovations Show at Bubia.

The launch was quite timely, given the forecasted El Nino-induced drought in 2012, and the increasing cost of pig feed from shops.

Basically, how the system works, is that kaukau tubers, leaves and vines are ground up into pig feed and stored in airtight containers which can be stored for up to seven months.

There is no need for cooking the ground kaukau.

NARI scientist Michael Dom, who is spearheading the project, said pig farmers in the Highlands had adopted the technique with much enthusiasm.

“We have a lot of support, particularly from the Highlands Pig Farmers’ Association, which is the biggest pig farmers’ association in the country,” he said.

Mr Dom said pig farmers in Western Highlands, Southern Highlands and Enga provinces had taken to the silage project with much enthusiasm and they were now targeting the whole country.

Tambul pig farmer Akilo Purunu, one of the first to adopt the silage technique since 2007, said it was a very good concept.

“Tambul is an area that is prone to frost,” he said.

‘Now, with this silage technique, we can preserve food for our pigs months in advance of a frost.

“This silage technique has helped us a lot and we are very happy.”

“There are two good reasons for the ensilage technique,” he said.

“The first is that we can store food for our pigs for six months in advance,” he said.

“We also reduce our use of firewood to cook food for our pigs.”