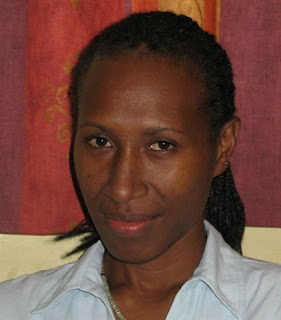 From the back, with her extensions pulled back in a curly haired ponytail and her tall frame, she looks almost different.

Almost, because as she turns to greet the next person, you see the friendly smile and that questioning look accompanied by a slight frown.

After spending a few minutes with her with the phone lines ringing off the hook, realisation dawns that it takes a person with fast fingers, a really good memory and of course the ability to sound the same in the afternoon after a long day of talking to and being cordial to people.

She has the numbers of half the business houses in Kokopo committed to memory, and can tell who’s calling in-house by the sound of their voice.

That’s what Susan does, working as the switchboard operator/receptionist.

Helping out the bursar’s executive secretary in making official bookings, attending to the Bursar’s calls when he’s out, and attending to students.

But what she enjoys most are the few occasions when she has the added responsibility of acting in the bursar’s secretary’s position.

Born Susan Natasha Mambu (pictured)  to an East New Britain mother and an father, Sue is the second of five children and lists one of her interests as spending time with her younger brother and sister.

She grew up in and moved to East New Britain in 2005 with her family.

Graduating from Gerehu Provincial High, she went on to study computing at the International Training Institute and graduated with a diploma in computing technology in 2004.

“Graduating from ITI with that diploma is something I am proud of.”

However, she plans to continue her education, to be better qualified so she can attain what she envisions herself doing in a few years time.

“That is, to be a secretary hopefully working for one of the bosses here at PNG University of Natural Resources and Environment.

Still working towards the stage where she would be able to fill in the ‘what has been your biggest achievement?’ line, she says she is motivated by her parents, especially her father.

“He is the one person on earth that I have to prove myself to.

“I try to be positive, and to look on the bright side, even when I’m down, I know it will not last.

"Tomorrow is always another day.”

She says she tries to live by her motto, and that is to "forgive and forget and let life continue because nothing really matters much.”