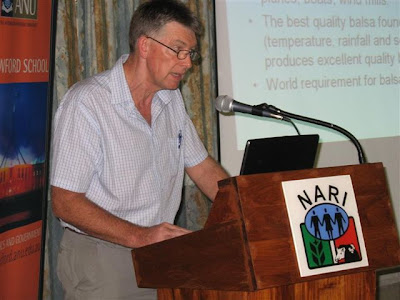 
By SENIORL ANZU of NARI

A prominent agricultural scientist who has spent his entire professional life in for over three decades has been recognised  for his contributions towards agricultural development in the country.
He is Dr John Edwin Moxon, a senior National Agriculture Research Institute (NARI) scientist based at Keravat at the Lowlands Agricultural Experiment Station (LAES). 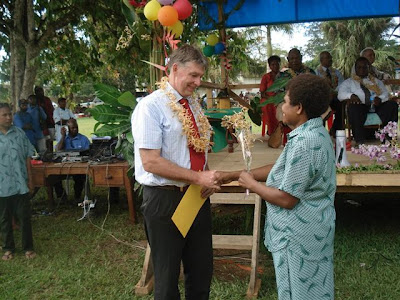 Dr Moxon was among those listed on Queen’s Birthday award list last month.
He will be awarded the Commander of British Empire (CBE) for services to agriculture and to NARI in particular.
The award will be conveyed on July 12.
Dr Moxon is a household name in the and Rabaul areas of . Currently, he is the man behind the development of PNG’s galip nut industry.
This is a new innovation in the making, promising to become a lucrative revenue and income earner for Papua New Guineans for many years to come once the industry gets into full swing. Galip is valued at around US$300 million industry at the world market and grows only in PNG, and .
Dr Moxon, 58, from , , first arrived in the country in 1980 as a young agriculturalist straight after his PhD in Entomology from the , .
Upon recruitment by the Department of Agriculture and Livestock, his first posting was in East New Britain at LAES, a place he has lived and worked ever since.
He started as an entomologist, dealing with pests and diseases of a range of food and tree crops. He led a team of scientists, both expatriates and nationals, in various capacities, including as LAES team leader 1986-1993 with major responsibilities in scientific and administrative management of the farming systems research programme for the wet lowlands of PNG.
From 1993 to 2000, Dr Moxon worked with the PNG Cocoa and Coconut Research Institute (now PNG Cocoa Coconut Institute) as its chief executive officer.
His work on cocoa resulted in scientific development and commercial release of the first hybrid cocoa clones for PNG now commercially achieving four tonnes dry bean cocoa per hectare, arguably amongst the best-available in the world.
After PNGCCI, Dr Moxon returned to LAES in 2000, this time under NARI as the research programme leader, a job he has held to this date, taking leadership in scientific research for development, focusing on food and cash crop research for food security and income generation for the wet lowlands areas of PNG.
He continues to contribute to the cocoa industry, especially towards the cocoa pod borer pest through strategic management and crop diversification programs.
In 1993, Dr Moxon received a certificate of service from the Government of PNG.
He is married to Wendy from Nonga village in province and has three children.
Posted by Malum Nalu at 6/29/2010 03:20:00 PM