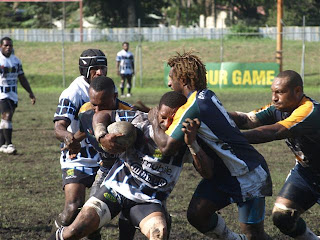 MENDI Muruks edged Masta Mak Rangers 10-6 in round eight of the bemobile Cup in Lae yesterday thanks to a last-minute try to hooker Andrew Baine, The National reports.
In the other games, Port Moresby Vipers beat Lae Bombers 20-10, Mt Hagen Kuris zilched Simbu Warriors 30-0 and Rabaul Gurias rode roughshod over Enga Mioks 44-10 in the 2009 grand final replay.
Baine scored the match winner in the 76th minute after both sides were locked at 6-6 for most of the second half .
The Lae-based Muruks were first to score in the opening 40 minutes when halfback Joshua Molsi jinked his way through several defenders from 30m out for a brilliant solo effort.
The try was converted by Kiwa Kili for a 6-0 lead to the home side.
The Muruks, with representative prospect Norbert Kembo and Jackson Undi at the helm, matched the Rangers in the ruck and the game soon turned into an arm-wrestle.
Muruks play-makers Kili, Molsi and Baine combined to send Undi over the line only to be denied by a try-saving effort from Rangers’ Nathan Anjo, that dislodged the ball.
Rangers forwards began to muscle-up as the game progressed with hardworking Johnson Kuike, Francis Ray, Simon Young, Aaron Mulunga and Anjo gaining yardage and asserting themselves in defence.
Anjo controlled the Rangers surges effeciently from his dummy-half role but the Port Moresby franchise lacked the finishing touch in the backline with several scoring chances gone begging.
Rangers’ rookie winger Michael Keith came close to scoring in the latter stages of the  half when running off a Mulunga short ball only to be pushed into touch and the score remained 6-0 to the Muruks at the break.
The tempo increased in the second half when both teams exchanged some hard hits in defence.
The visitors eventually found the tryline in 60th minute when five-eighth Mark Mexico put up a bomb which bounced fortuitously for substitute Samson Ene to score out wide. Samuel Maniat successfully converted to level the scores at 6-6.
Rangers created more chances when forwards Ray, Mulunga,  and Anjo broke the Muruks defence at different stages but were let down by a disjointed and complacent backline.
Luckless wingers Joel Ambrose and Keith’s efforts from the dummy-half only highlighted Rangers’ lack of coordination in attack.
Muruks made the most of their opportunity with Baine’s individual effort.
Posted by Malum Nalu at 6/28/2010 12:43:00 PM