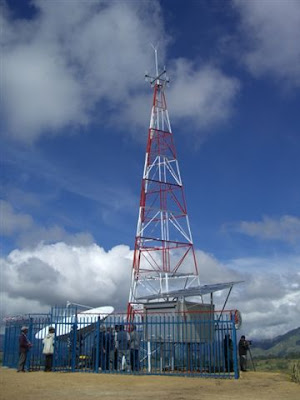 One of the two communication towers at Mt Hakuna in the Mehenave community area of Fayantina Local Level Government.Picture courtesy of HENZY YAKHAM

It is now a thing of the past for people in Henganofi district of Eastern Highlands province to travel some 30km into their provincial capital Goroka or Kainantu along the Highlands Highway to enjoy their favorite television programmes.
This follows the recent completion of installation work to erect two communication towers transmitting television signals in most parts of Henganofi district and the neighboring districts.
The towers were built at a cost of over K200,000 by local company, Highlands Cable Television and completed last month (May).
People have since been receiving EMTV signals and seeing television programmes including news and sporting events such the popular Australian National Rugby League (NRL) games on Fridays and this year’s State of Origin games.
Apart from most parts of Henganofi, the coverage areas include parts of neighbouring Okapa, Lufa, Kainantu and Ungai-Bena districts.
Member for Henganofi Ferao Orimyo said this was something totally new and important service which the people, particularly those with television sets, would not have to make the one-hour trip to Goroka just to see their favourite programmes.
Mr Orimyo said previously, many public servants and others had to travel all the way to Goroka and Kainantu to NRL games.
“The new service will enable people to receive EMTV programmes and will help educate and inform the people through news and current affairs programmes,” he said.
Mr Orimyo has also urged the people to look after such important services for the benefit of everyone.
A spokesman for Mehenave community in Fayantina Local Level Government, Pentox Sayo thanked Mr Orimyo for bring television programmes to their homes and communities.
“We don’t have to spend money and take the risks to travel to Goroka and Kainantu to watch NRL games because we can watch them right here,” Mr Sayo said.