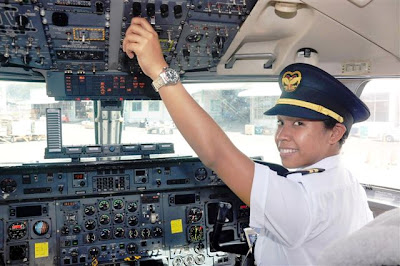 Air Niugini’s Cadet First Officer Rhoda Jane Ilave at the controls of the Dash 8 100 series that she is licensed to fly. She is one of six PNG women pilots flying for Air Niugini.

By BOSORINA ROBBY in The National

The trophy, sponsored by the Australian Civil Aviation Safety Authority, is awarded annually to three women pilots with the highest aviation exam results over the past year.

Ilave is probably the first female pilot in to receive the honour in recognition of her outstanding academic achievements in professional aviation studies by female trainee pilots.

She received the award last week.

“Young Rhoda has made everyone proud, her family, Air Niugini, the airline industry and PNG in general,” he said.

Ilave was studying second year medicine at the UPNG Medical Faculty when she decided to apply for the Air Niugini cadetship programme in 2008.

Inspired by her elder brother, who is also a cadet pilot with Air Niugini, Ilave did very well in her studies at flight school in in the 18 months she was there.

“She did very well in both her theory classes and practical tests. She passed all seven commercial pilot licence examinations in five months and accomplished brilliant results, scoring 100% for one examination, 95% and above for five other examinations and 88% for another,” Kumarasiri said.

“In the same year, she completed her seven Airline Trasport pilot licence examination in two and a half months, scoring 97% in two examinations and more than 80% for other examinations,” he said.

The cadetship programme is open to Grade 12 and above students with excellent results in all areas, particularly in physics, mathematics A and English.

Since 1989, the cadetship has seen at least six young people every year to be trained at various pilot training schools, the current being at the Professional Pilot Training at .

Kumarasiri said Air Niugini invested millions of kina annually in training young pilots and engineers whose results were commendable and comforting for the airline and its valued customers.

Ilave said she was quite shocked to win the award but was grateful for the tremendous honour.

“It’s really good and I am glad the Australian Women’s Pilots’ Association does such things to recognise females and to encourage them.

“The cadetship is a good thing that Air Niugini does for young people to decide for a career in aviation.

“I now look forward to a promising career with Air Niugini and to progress onto bigger aircraft in the future,” Ilave said.