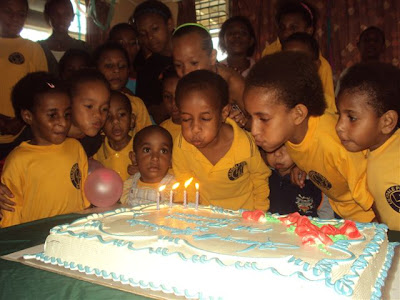 Story and picture by ALISON ANIS

These Papua New Guinean children are special; either their parents are dead or have deserted them, The National reports.
But, a loving couple, Marai and Hane Lagaru, and the PNG Children Foundation have taken all 21 under their wing and care for them 24/7.
On Tuesday, they all gathered around a huge cake and blew out the four candles, marking the foundation’s four years (Aug 17) in existence, which would not have been possible without charitable hearts like founding president Yiannis Nicolaou (of the Lamana fame) and long-time donor Sanjay Shah.
The Lagarus are supported by four housemaids, an education supervisor and a driver, all operating out of their Boroko location.
They were joined at the celebrations on Tuesday by two entrants of the 2010 Little Miss Princess fundraising quest and foundation adviser Nene Sta Cruz, digging into the pizzas and cakes and an assorted supply of fruit drinks, courtesy of Taurama Super Value Shop (SVS).