Bulolo MP, Sam Basil, has published photographs of the environmental damage caused by the Hidden Valley  gold mine and berated government agencies for not protecting the interests of local landowners and instead fighting the corner of the mining companies.
“I  want to make such information available to the public especially the resource districts to show them what they may expect when such developments comes their way in the future”, he says.
“Development as we all know will come at a cost but to me development must not cost my people’s environment as their lives depend on it”. 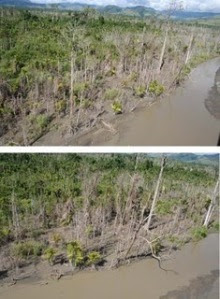 Basil says that as an MP he finds it very surprising that he is fighting the very institutions set up by the government of the people to monitor and safeguard the landowners interests – Mineral Resources Authority, Department of Environment and Conservation, Department of Mining and the provincial mining division.
“None of these Authorities or agencies are willing to help attend to the landowners' concerns of environmental destruction to the Watut River system” says Basil.
“MRA are totally ignorant.
"This organisation recently chose to buy two new Toyota Land Cruisers for Bulolo Ddstrict’s law and order offices costing more then K200,000 while ignoring the cries of environmental damages and MOA breaches by the both Watut River communities and the Nakuwi Landowners' Association”. 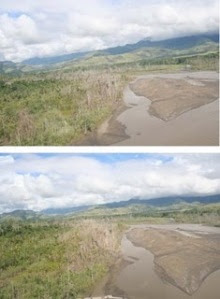 “The Morobe provincial mining division  officers were often seen wearing MMJV uniforms (orange jackets) and in the company of MMJV officers.
“Benson Suwang (provincial chairman of mines), a community representative whom I as MP for Bulolo appointed him into the Morobe provincial assembly,  gave a contradicting statement supporting the MMJV activities while ignoring the environment damages by saying development comes at a cost.
“The Department of Environment has never monitored the river system since MMJV started excavation and side casting from the mine site,  leaving the provincial government's mines officers walking around with MMJV-sponsored environmental reports - blindly believing without challenges.
“There is already evidence of the Watut River system damages and I will not turn back now but will fight this issue all the way.
“I welcome support and experiences from other Landowners or brothers and sisters from PNG.
“We must all now be responsible in making all mining practices now and in the future safe for the surrounding communities.If the government and its agencies are lazy or compromises themselves then the developer will take shortcuts at the cost of the unfortunate rural people”.