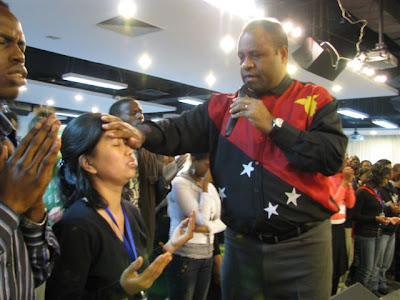 Flashback: Kingal in China during the international students’ convention last year. More than 500 foreigners in China attended this annual convention in Beijing. Kingal had also ministered the Word of God to believers in Russia. – Picture courtesy of MATHEW YAKAI

PAPUA NEW Guinea is in mourning over the sudden and tragic loss of evangelist Joseph Kingal.
Kingal, in his early 40s, from Western Highlands, as the head of The Word, The Spirit and The Cross evangelistic ministries based at Omili, Lae, was seen as the flag bearer of hope and redemption in a country racked with social problems, The National reports.
The graduate accountant-turned preacher and wife, Susan, registered the evangelistic movement as directors in 1996 and went on nationwide crusades wooing in thousands to their nightly sessions.
Their messages, based on the Bible at the week-long crusades, hit a chord with thousands of people at all levels of society.
Many people from the streets and settlements of Lae, Port Moresby, Mt Hagen, Goroka, Madang and Rabaul were shocked upon learning of Kingal’s demise in a nasty traffic accident on a bridge in the Markham Valley, Morobe, while returning from a crusade in Madang.
The influence he wielded was so much so that his death had sparked people into taking up a national government function of building and maintaining infrastructure. People are now trying to set up a fund from donations from the public to make the Zumim bridge safe.
Many callers yesterday were told that Kingal had passed away and that his wife was at the Angau Memorial Hospital requiring life-saving surgery and one of their children was being monitored while in a critical condition.
Outside his ministry at the old Tanubada ice cream factory at Omili, hundreds of mourners and well-wishers tried to gain entry but were prevented.
Members of the ministry had barred the public, only allowing pastors to enter as Kingal’s body lay, having been transferred from Angau Memorial Hospital.
More mourners were flocking in by road from Madang and the highlands provinces of Enga, Southern, Western, Chimbu and Eastern.
Traffic officers at Air Niugini said many more would be travelling in from Port Moresby, Kimbe and Rabaul.
In Port Moresby, a prayer vigil was being held by fellow evangelist Pastor Joseph Walters where hundreds of mourners attended.
Kingal’s death had gripped a nation so much so that public office holders, including Governor-General Sir Paulias Matane and settlement dwellers, were sending in their condolences to the media.
An attempt to blanket news coverage was made by the managing director of Wantok Radiolight, Pawa Warena, who asked not to broadcast “any more stories” about the accident “until advised by the Joseph Kingal Ministry”.
But public demand for details surrounding the death, and of the state of his family members, was overwhelming.
Posted by Malum Nalu at 10/20/2010 10:54:00 AM