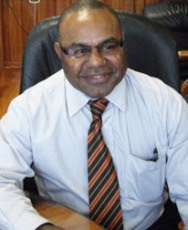 A former chief of staff to the Papua New Guinea prime minister has been charged with murdering a PNG rugby league legend.
Dr Theo Yasause, part of the highly connected East Sepik political elite, has been charged with the wilful murder of Aquila Emil, Port Moresby Metropolitan Police Commander Joseph Tondop told AAP on Tuesday.
Emil, 44, who played for PNG's national rugby league side the Kumuls, was shot dead in his car near the Lamana night club in Port Moresby early on Friday.
Mr Tondop said Yasause was arrested after he went to the police on Monday afternoon.
"Dr Theo was arrested then charged with one count of wilful murder.
"He is expected to be in court today (Tuesday) to apply for bail and make a plea," he said.
Mr Tondop said Yasause spent the night in custody in a Port Moresby police cell.
Emil was shot with a pistol at close range about 3am local time on Friday following an argument outside the club where both Emil and Yasause had spent the evening.
PNG's Post Courier reports an argument started when their cars collided outside the club.
A woman who was with Emil witnessed the incident.
On Monday, former Newcastle Knights rugby league player, now PNG national selector, Arnold Krewanty said Emil's death was a massive loss for PNG.
"We played footy together and he was a mate and comrade and we both were working on getting a PNG side into the NRL," Mr Krewanty said.
"Aquila had a lot to offer PNG, especially helping the schoolboy rugby league in the capital.
"Rugby league won't get another like this, he gave so much back to the game," he said.
Yasause was chief of staff to Prime Minister Michael Somare in 2007 and 2008 before becoming head of PNG's office of climate change.
He was suspended from this position in 2009 after numerous scandals and allegations of corruption.
Posted by Malum Nalu at 2/08/2011 03:39:00 PM