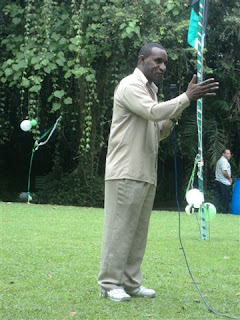 Educated Western Highlanders have formed a non-political entity known
as Western Highlands Development Forum to pool together resources for
development.
The forum had a gathering at the Botanical Gardens in Port Moresby
last Saturday, attended by prominent Western Highlands personalities,
as well as students from University of PNG.
"It's a very simple concept," executive chairman Samson Komati Yuimb
(pictured) told the gathering.
"There are more than 10,000 degree holders from Western Highlands since 1975.
"These educated elite do not have a voice in the development of our province.
"This group will be known as Western Highlands Development Forum."
Yuimb said once all formalities were completed, office bearers would
be elected, and a secretariat office would be set up in Mt Hagen.
"It must not be a political thing," he said.
"Politics has always been a problem area for us in Western Highlands.
"We aim to keep this group as non-political as possible."
Prominent Western Highlander, journalist John Eggins, suggested that
the forum operate along the lines of the successful Ipatas Foundation
in neighbouring Enga province.
"It's good to see a lot of young people here," he said.
"Organisations such as this are good.
"Our problem is we're always suspicious of each other.
"When you start something new, people will always be suspicious of you."
Eggin called for transparency if the forum was to be successful