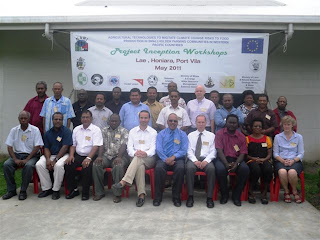 An inception workshop is underway this week at the National Agricultural Research Institute headquarters in Lae to develop and plan activities of a mega project to be implemented in three Western Pacific countries.

The European Union (EU) -supported project "Generation and adaptation of improved agricultural technologies to mitigate climate change-imposed risks to food production within vulnerable smallholder farming communities in Western Pacific countries" is implemented by NARI in partnership with the Ministry of Agriculture and Livestock (MAL), Solomon Islands, Department of Agriculture and Rural Development (DARD), Vanuatu and the University of Natural Resources and Applied Life Sciences (BOKU) of Austria.

Action coordinator Dr Workneh Ayalew said the inception workshop indicated the start of the implementation phase of the project after it was officially launched in Port Moresby in March this year.

Dr Workneh said the objectives of the inception workshop were to: apprise participants of the planned project activities; canvas opinions of key stakeholders on the major activities and on selection of suitable target communities; and affirm list of activities to be undertaken during year one of the project.

Dr Worknew, who is also in charge of the livestock component of the project, said the workshop was expected to create common understanding among key stakeholders on the objectives, major activities and expected results of the project, and administrative arrangements.

"It also expected to collate background and baseline information about target communities and related actions," he added.

The project, which comes under the EU science and technology programme, is to mitigate climate change risks associated to food security and livelihoods for vulnerable smallholder farming communities in the Solomon Islands, Vanuatu and Papua New Guinea.

It is aimed at improving food production capacity of smallholder farming communities in the three countries, where climate change-induced problems are becoming significant threats to agricultural production and productivity.

The main focus of this project is to identify appropriate types of water technologies and alternative crops/crop varieties and livestock/livestock feeding systems to help sustain and improve food production under drought, excess precipitation and saline soil conditions.

The project, to be implemented over a five-year period, will cover 11 vulnerable sites in the three countries, covering about 100 households per site.

This will eventually lead to about 2.4 million smallholder crop-livestock mixed farmers.

Similar workshops are planned to be held in the Solomon Islands and Vanuatu this month to start the implementation phase of the project in these countries.