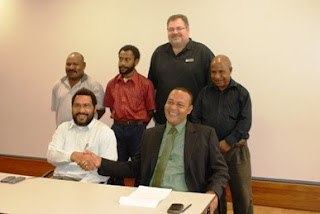 Caption: Mining Minister Hon John Pundari and MP for Wau, Bulolo Hon Sam, Watut Union members, MMJV, Morobe provincial representatives after signing the joint press release
The Hidden Valley Joint Venture (HVJV) welcomed the outcomes of a stakeholder meeting held in Port Moresby on May 12,  2011,  that discussed constructive solutions to community concerns relating to the Hidden Valley Mine.
The HVJV would like to thank the Minister for Mining, Hon. John Pundari MP for coordinating the meeting and acknowledge the cooperative approach taken by all attendees, including key government departments, the Member for Bulolo, Hon Sam Basil, Watut River community leaders and the HVJV.

In the spirit of this cooperative approach, the HVJV has agreed to stop using the statutory declaration form as part of the voluntary garden compensation process.

The HVJV will instead use an amended version of the current 'Damages Assessment Payment Receipt Form' to document all future payments under the voluntary garden compensation process.
The use of a receipt is a normal, responsible and transparent approach as it provides all parties with written evidence that the compensation amount has been agreed and received.
As agreed at last week's stakeholder meeting, the HVJV will now revisit the remaining 471 Watut River landowners who have not received compensation in order to finalise the voluntary garden compensation process.
The HVJV has already paid compensation of K3.8 million to 3,700 Watut River landowners for flood damage to crops and gardens, to which mine related sediment may have contributed, along with natural events including land slips and major rain events.
The HVJV will regard all forms already signed by Watut River landowners as being the same as the amended receipt form. Therefore, landowners who have already received compensation do not need to sign a new form.
The process for the voluntary garden compensation payments will continue the current robust and transparent approach which involves a claim submitted from the affected landowner, followed by a damage assessment.
The damage assessment is conducted by a multi-party team comprising HVJV employees, Morobe Provincial Government or Bulolo District Office representatives, LLG representatives and the claimant/landowner of the affected property.

The HVJV remains committed to continued constructive dialogue with its key stakeholders, including the national, provincial and local level government, community leaders and the local community in order to resolve remaining community issues.

The Hidden Valley Mine is located near Wau and Bulolo in Morobe Province. It was officially opened in September 2010.

The Hidden Valley Mine has a workforce of more than 2,000 people with 95 per cent of workers being PNG Nationals and 50 per cent being from the local communities.

It is important to note that the Hidden Valley Mine has an engineered tailings storage facility and no mine processing residue, or tailings, is discharged into the river.

The mine related sediment in the river that has caused community concern was run-off from mine overburden and construction activities.

The mine transitioned from construction to operation in October 2010.

Mine sediment run-off is now significantly lower due to mitigation measures.

These measures included ceasing of side casting of waste rock and overburden in September 2009, ongoing revegetation of exposed slopes and erosion control, and the storage of waste rock in engineered waste rock facilities.

The HVJV places a high value on responsible environmental management and our relationship with local communities.

The HVJV has been making voluntary garden compensation payments to communities along the Watut River for flood damage to crops and gardens, regardless of whether this was due to additional sediment run-off from the mine construction activity or by natural events such as landslips and heavy rain.

These programmess were developed in partnership with the local and provincial government and are aligned with their development programs.

An Expert Stakeholder Advisory Panel is also being established by the HVJV to provide independent review of sediment related issues and related community concerns.