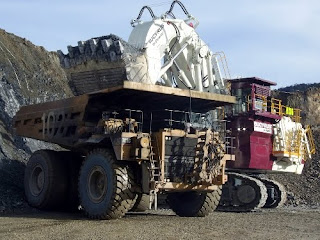 Caption: The new shovel making its first load of copper ore at the Ok Tedi mine after the commissioning.

The shovel, known as the Bucyrus RH200, was commissioned on  May 21.

The shovel was purchased for US$10 million (K24 million).

This is the first hydraulic shovel owned by OTML since the mine started operation 30 years ago.

The company previously owned and operated a fleet of electric shovels but since decommissioning them a few years ago, OTML has been contracting Star West Limited, a part locally-owned contractor company, to supply and operate hydraulic shovels.

OTML's purchase of the new hydraulic shovel also signifies a start for OTML where it will start owning and operating most of the heavy mobile equipment in preparation for mine life extension.

OTML mine executive manager Alan Merritt while commissioning the new shovel said the shovel will produce 2,200 tonnes of ore an hour.

He said OTML is expected to experience less downtimes with the new shovel now operating.

"It's a big day for us at the Ok Tedi mine as we take delivery of our first hydraulic shovel. The shovel will help boost production, initially the production of limestone for the river system," Mr Merritt said.

Ok Tedi mines limestone so that it can be added to the river system to neutralise the sulphur in the waste rock.

Bucyrus project manager Russell Jenkinson, who was at the Ok Tedi mine supervising the assembly of the shovel over the last seven weeks, said the Bucyrus RH200 shovel is popular with other mining projects in PNG such as Newcrest Lihir Gold and the Porgera Joint Venture Project.

This followed the exit of Toronto (Canada) listed company, Inmet Mining Corporation as a shareholder. Inmet Mining's 18 per cent share, which it held since 2002, was bought by OTML for US$335 million and cancelled, leaving OTML as a company owned today by PNG Sustainable Development Program Limited with 63.4 per cent and the State of PNG with 36.6 per cent.