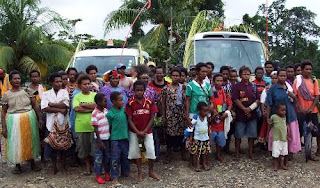 Caption: Women of Lower Ok Tedi posing in front of their new buses which they handed over to Lower Ok Tedi Investment Limited to be used at OTML's Bige dredging project.

Women living in areas that are being affected by the operations of the Ok Tedi mine are now investing in business opportunities for their long term benefit.

And a call has been made for more women in those regions to follow suit after women of Lower Ok Tedi through their Nima Ara Women's Association handed over two new buses to help transport workers at Ok Tedi's dredging project at Bige.

The buses, one a 15-seater and the other a 25-seater, were handed over to Lower Ok Tedi Investment Limited (LOTIC) on May 9 in a small but significant ceremony.

Nima Ara is a women's association within the community mine continuation agreement (CMCA) region.

LOTIC is a landowner company which has been engaged by OTML to provide logistical support to its Bige operation.

Bige is one of Ok Tedi Mining Limited's operating bases where the dredging project is located.

He said OTFRDP was committed to supporting women and children of the mine-impacted communities by helping provide various income-earning opportunities for them.

"I want to say thank you to LOTIC and OTML for giving the women this opportunity," he said.

"This is the first for all the eight associations within the CMCA to be involved as far as business opportunities are concerned.

"Nima Ara is actually setting the pace by going into an arrangement like this and this demonstrates the confidence you have in LOTIC and to invest your resources into.

"I believe these two investments are good and will bring good returns to support women within the association.

"I would like to challenge the association to make sure that the earnings you receive from these investments are spent on programs that will benefit women."

OTML executive manager for Kiunga and Bige operations, Derrick Kelly said the new buses would now provide some relief to the logistical needs of Bige and would provide safe travel for workers to and from work.

The buses were bought from funds allocated under the 10% CMCA Women and Children's Fund earmarked for women in the Wai Tri Trust.

In 2007 the mine-impacted communities together with OTML agreed that 10% of the K1.1 billion earmarked under the CMCA would be set aside every year to support women and children.