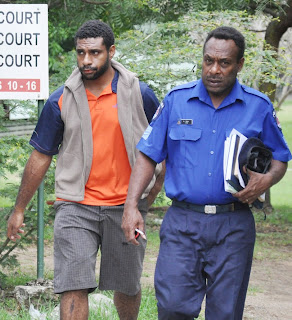 Caption: Theo Abal in court ... Theo Abal, the adopted son of Acting Prime Minister Sam Abal, is escorted out of the Waigani District Court by a police prosecutor. Theo, who was charged with the June 13 wilful murder of a Port Moresby waitress, made his first appearance in court yesterday. The family of Theresa Ori Taisu, a mother of four children, will petition the acting prime minister for compensation. – Nationalpic by EKAR KEAPU

By JUNIOR UKAHA and SAMUEL RAITANO

ACTING Prime Minister Sam Abal will be petitioned by the family of the woman whose body was found in his compound to pay them compensation, The National reports.

This came after his adopted son, Theo Abal, who police had arrested in connection with the woman’s death, appeared in court yesterday charged with wilful murder.

The family said Theresa Ori Taisu, who was allegedly killed on June 13, was the mother of four children who had been struggling to pay for their school fees.

A family spokesman Kakaito Kasi said the family had prepared a petition to give to the acting prime minister.

“We want him to compensate us for the death of Theresa. Her death has put unnecessary financial strain on us,” he said.

Kasi said the family had to dig deep into their pockets to meet obligations at the haus krai since last Friday.

He said the family wanted Abal to:

*Compensate the deceased’s children for the death of their mother;

*Compensate the family for the killing of their daughter and sister;

*Meet all haus krai costs and the costs of repatriating her body back to Karaeta village; and

*Reimburse the family for money spent on haus krai expenses.

Kasi said the family wanted to meet Abal to give him their petition.

He said they did not know why she was killed.

“We only learned of her killing through the media and went to the morgue last Friday to identify her,” he said.

He said at the time of her death, she had been living with a friend at Gerehu and worked as a waitress at the Sunset Lodge at Ela Beach.

He said Taisu’s children were in the village with Yeare Ori Taisu, seven, and Atu Ori Taisu, six; doing elementary at the Ila Karaeta Primary School in Kerema town.

Kasi said Theresa was a divorcee and the second child in a family of five sisters.

Theo made his first appearance at the Waigani District Court yesterday.

Theo, 21, from Pawas village in Enga, was charged by police last Friday.

Magistrate Cosmas Bidar told Theo in court that the maximum sentence for the offence was the death penalty.

Theo was read the charges against him before being escorted out of the courtroom.

The court ordered that Theo be remanded in custody at the Bomana prison and will appear in court again on July 21.