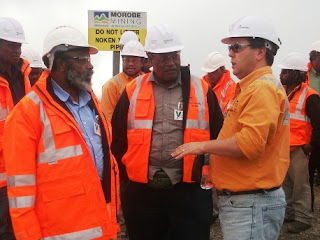 Caption: General manager Hidden Valley mine, Mark Mitchell explaining some of the features and mining operation strategies to Clant Alok and Dr Paul Ngabung at the Hidden Valley Kaveroi open pit - look out.

The Hidden Valley Gold mine’s engineered tailings storage facility (TSF) has been commended as a potential model for future tailings disposal options for mining projects in the country.

These were the comments from a group of participants from the National Government’s Central Agencies Coordinating Committee (CACC), provincial administrators and heads of commodity boards who visited the mine as part of the recently-completed 2011 priority impact projects conference in Lae last week.

The conference was held to further discussions as part of a first quarter review on the Crown Plaza Pronouncements earlier this year.

Speaking on behalf of the tour group, Alok, one- time provincial administrator for Morobe and Madang provinces commended mine general manager Mark Mitchell, Joint Venture representatives, David Hume (Harmony Gold) and Brett Fletcher (Newcrest Mining) and senior mine employees of the impressive standards being practiced - highlighting in particular the construction and use of the tailing storage facility (TSF) for tailings disposal as at Hidden Valley, all tailings from the processing of ore are stored permanently in an engineered TSF.

“The general consensus and comments from this group today after touring the mine has been nothing but impressive” Alok said.

“Hidden Valley is emerging as the cream of the crop and we take our hats off to you in the way you conduct your business; in the confidence you have by appointing PNG nationals to senior managerial roles at the mine that are capable and experienced in the PNG mining industry.”

Along with other delegates, Alok pointed out the TSF structure, saying they had also noted the predominantly local workforce of more than 90% Papua New Guineans employed and the joint venture’s future plans to localise the mine management, the range of community and regional development projects and programmes for stakeholders and implementation of certain aspects of the mine’s closure plan in the areas of revegetation for a project that had only just begun operations.

“We have learnt a lot from this mine site today and will be taking these lessons and knowledge back to our superiors where we shall initiate discussions for inclusion into future plans and policy documents especially in the area of mining, related to tailings disposal,” Alok said.

Speaking on behalf of the Joint Venture partners, Harmony Mining Executive, David Hume thanked the delegates for taking the time to visit the mine operations saying stakeholder relationships were very important.

“We are delighted that you took this opportunity to visit the mine to observe the way we do business here and we look forward to working with you and building on these relationships as we continue to improve our practices into the future.”

Hidden Valley general manager Mark Mitchell also expressed his appreciation and thanked the delegates for taking the journey to visit the mine.

The delegation indicated through senior bureaucrats there was every intention for future visits from government to work with and learn more from Hidden Valley mine operations.