Goroka girl having time of her life in San Antonio, USA 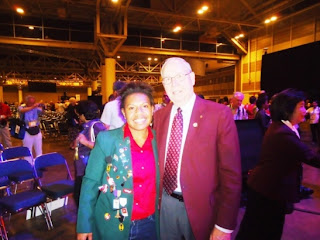 Goroka girl Serah Gahuno is having the time of her life in San Antonio, Texas, United States of America, as an exchange student at Providence High School.

The 18-year-old former Goroka Secondary School student is the first-ever exchange student sponsored by the Rotary Club of Goroka, District 9600 (which covers parts of Queensland, Solomon Islands and Papua New Guinea), for this unique scholarship.

"The programme allows young people to develop their leadership potential and gain experiences that will assist them in forming their own values and moral standards.

"Serah is being home hosted by various Rotarians in San Antonio, Texas.

"During her 12 months study in the USA, Serah has been visiting various Rotary clubs in Texas where she has been telling people about her country and her people's culture."

Gahuno is part Nagamiza and Kerefa villages in Eastern Highlands province, was born on Feb 7, 1993, and is the oldest and only girl in a family of three younger brothers – Emmanuel, Wayne and Abraham – as well as stepbrother Osbourne.

Her father is Raymond Gahuno and mother is Stella Gahuno.

Gahuno did her elementary school at Goroka Christian Academy in 2002-2003, primary at East Goroka Primary School in 2004-2008, and secondary at Goroka Secondary School in 2009-2010 when she was selected to go to the USA.

She remembers that last year, she was awarded the scholarship after it was awarded to her school, requiring students aged 16-18 to fill out a paper and then write a short essay on how much they knew about Papua New Guinea.

"Several of my class mates, plus other students,   filled out the application plus having our parents to sign the paper we handed in to the school's administration," Gahuno told me from San Antonio this week.

"Later that same day, my mum got a call from the Rotary Club of Goroka that I would attend an interview at the Bird of Paradise Hotel.

"It was not only me who went for the interview, but two boys from my school, so we were three altogether.

"In the interview, the Rotarians gave us few minutes to stand up and talk about what we know about Papua New Guinea and how we could tell other people about the country.

"They gave us few days to wait and then, again, my mum got a call that I finally won the scholarship.

"That's how I was told I would come to US.

San Antonio is the seventh-largest city in the USA and the second-largest city within the state of Texas, with a population of 1.33 million.

It's a world away from home sweet home in 'kol peles' Goroka, however, Gahuno is enjoying every minute of it

"Well, San Antonio is one of the top cities in Texas with lots of beautiful attraction like Alamo Riverwalk," she says.

"It has the influence of mostly Mexican-American culture, which makes me love the TexMex food, especially tacos.

"My thoughts of being an exchange student challenged me as to how well I can become a good ambassador of my country, and also helped me to improve my skills of communicating with people of different occupations, religion and people from different parts of the world.

"Being here in USA is very different to me and it makes me feel a lot different.

"When seeing things here, it makes realise how long I've been missing all these technologies, which I'm just now trying to explore.

"Almost everything seems to be my first time experience!

"All I can say about the difference is, here is a developed nation as the world knows, and Papua New Guinea we are developing but I still love my country.

Gahuno says being an exchange student gives her the greatest opportunity to explore the world and also enables her to broaden her knowledge.

"Everyday, there is more to learn, see and talk about," she tells me.

"Being here in San Antonio, Texas, United States, was a surprise for me.

"I have met other exchange students from almost all parts of the world and that helps me to understand the diversity of people we are.

"One of the interesting facts is that while being here for my exchange year, it has been a great opportunity for me to be an ambassador of my country and to share the diverse culture PNG has.

"Everywhere I went, people thought I was from Africa, which sounded strange to me.

"When they asked me where I'm from, I told them I'm from Papua New Guinea but they couldn't figure out where exactly it was located,

"I told them it was an island off Australia, and from there they started Googling and learned more about the country.

"This was the case not only with the Rotarians but also in the school that I attended, and families that I stayed with.

"Now I am glad at least people know where PNG is.

"One thing that I can never forget is carrying my country's flag at the Rotary International convention in May at New Orleans.

"That time was the first time in my life that tears fell from my eyes while walking with the flag in front of thousands of Rotarians from around the world.

"When I took my seat I said, 'Thank God here I am a Papua New Guinean carrying my own flag and not a representative'.

"Being here is a challenge for me as well as a stepping stone.

"The things I see help me to think further beyond.

"Personally, I would like to thank my loving parents who are always there for me, my cheerful brothers, all my family, friends and most importantly to Goroka Rotary Club and its members, especially Lesley Ririka.

"Last but not the least, thanks to the 9600 Rotary District in Australia and my host club San Antonio Mission Trails in District 5840.

"My words to young people of Papua New Guinea is Phillipians 4:13: 'I can so all things through Christ who gives me strength'."

Gahuno says she would love to continue college studies in the USA if given the opportunity.

"I would love to do my college here if I get a chance to and go into medical school," she adds.

"In the future, I would like to work in the medical field and help my own people.

"I have been set up by the Rotarians at the hospital so I can do hospital tours and I really love it.

"Big thank you to Goroka Rotary Club and the Rotary International for their work of 'Service above Self'."