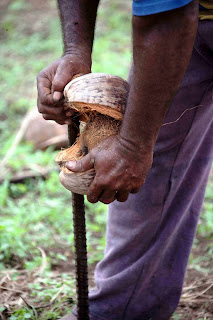 Caption: Something familiar to all Pacific islanders: a coconut being husked.-Picture courtesy of Origins Pacific (www.originspacific.com.fj)

Known for centuries as 'the tree of life' because it has so many useful products, it seems unlikely that the coconut could have any new ones still to offer. But it does – and what's more, it's almost as if the tree has been saving them for the 21st century. Because these new products may be able to help us fight some of today's biggest health problems.

'We all know about virgin coconut oil by now,' says Tevita Kete, coconut expert at the Secretariat of the Pacific Community. 'But there are other coconut products that also have many health benefits.'

Coconut flour is one of them. Made by milling the dry, pressed coconut flesh after the oil has been extracted, the flour is gluten-free and grain-free, offering a flour alternative to anyone with these allergies. It is also high in fibre – in fact, it has more fibre than any other kind of flour. It is well known that a high-fibre diet is very good for the intestine, can help manage diabetes, and protects against heart disease and some forms of cancer.

Coconut flour works particularly well in sweet recipes like cakes, muffins and pancakes – and as a bonus it is naturally sweet so you don't have to add as much sugar as with ordinary flour. It can also be used with good results in some savoury recipes like soups and sauces, and different kinds of bread, from pizza base to roti.

If you can't tolerate gluten or grains, some recipes, for example those for some muffins and cakes, work with 100% coconut flour. For others who just want healthier eating, substituting 10–30% of the wheat flour with coconut flour gives good results. You can find many recipes on the Internet – search for 'coconut flour recipes'.

Coconut sugar and coconut syrup are sweeteners that are familiar in Kiribati and Tuvalu – and also the islands of Rabi and Kioa in Fiji, where people from these countries have made their home – but, surprisingly, not in the other Pacific Islands. These products are made not from the nut but from the sweet sap of the flower. Known as 'toddy', this is boiled down into syrup, or boiled further until it crystallises and can be ground into sugar.

'Coconut sugar and syrup are sweeteners with a low glycemic index, which means they are very helpful for people managing diabetes and those who are trying to control their weight,' says Mr Kete. 'They have a great taste, and are also high in minerals such as potassium, magnesium, zinc and iron", he adds. 'These are natural and healthy sweeteners.' However, like coconut flour, these products are not yet commercially available in the Pacific.

This may soon change, however. Fijian entrepreneur Peni Drodrolagi has plans to import these products from Kiribati and Tuvalu. 'If we can build a market for these sweeteners, then the next stage will be to start producing them here in Fiji,' he says. Eventually, he believes, these could become export products, boosting Fiji's economy.

One final product – coconut water – is as old as coconuts themselves. What is new, though, is its use as a health and sports drink. Potassium and essential electrolytes are the 'magic' ingredients that are thought to enhance performance and recovery. Coconut water has much more of these than manufactured sports drinks, without any of the artificial additives. As coconut water takes the world by storm, we may soon see Pacific coconut water conveniently packaged and on our supermarket shelves. And again, that could be the first step to a new export for the region.

'As we try to eat both more healthily and locally, these products would be a welcome addition to our shops,' says Kete. 'Like virgin coconut oil, they can easily be produced in small-scale community-based industries. We in the cities will get locally produced health foods, and remote island communities will get much-needed income.' Surely that's a win–win situation.

Anne Moorhead is a science writer and editor. She was commissioned by the European Union-funded Facilitating Agricultural Commodity Trade (FACT) project for this series of articles on virgin coconut oil. Implemented by the Secretariat of the Pacific Community (SPC), the FACT project works to increase the volume, value and diversity of Pacific Island agricultural and forestry export products.