Somare arrives back in Port Moresby 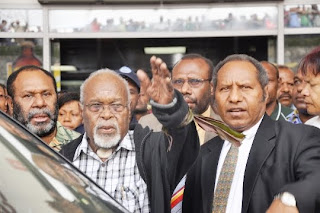 Caption: Sir Michael waves to the crowd before boarding his car. He is flanked by Valentine Kambori (left), Tony Aimo (behind him) and Sam Abal.-Picture by EKAR KEAPU

GRAND Chief Sir Michael Somare arrived at Jackson Airport in Port Moresby today from Singapore after being hospitalised there for more than four months.

Also present were the Sepik council of chiefs led by their president Eric Wangehau.