Recent events in the life of the present PNG Parliament have revealed some glaring deficiencies in the framework set up to take the nation into Independence in 1975.
In an observationquoted by Nancy Reagan, the wife of former US President Ronald Reagan, ‘the strength of the tea bag is only revealed when it’s immersed in hot water.’
So what are the deficiencies that have been revealed? Basically, many could be collectively described as a lack of the necessary checks and balances in place to ensure parliamentary power and legislative government does not get out of control.
In fairness to the so called founding fathers and their expat ‘minders’, the recent circumstances could hardly have been envisaged when the PNG Constitution was drafted. Yet as PNG has had the resilience to advance from the Stone Age to the Modern Age in one giant leap, so too must the structures of government be adapted to meet the requirements of the day.
The majority of democratic nations throughout the world seem to have one thing in common. That is a House of Review as part of the structure of Parliament. While legislation is debated and enacted in a Lower House, all legislation must be reviewed by an Upper House before being signed into law.
Such is the case in many Commonwealth countries that had their Parliaments modelled on the Westminster system. After many amendments, the United Kingdom’s House of Lords still has a useful function of reviewing legislation from the House of Commons. The Australian Senate performs some very useful functions in that until a Bill from the Lower House is reviewed and passed by the Senate, it cannot be signed by the Governor General and become law.
Perhaps the time has now come for PNG to consider creating an Upper House of Review?
George Washington is supposed to have observed to Thomas Jefferson, another ‘doubting Thomas’ about the necessity of having an Upper House in the United States government. As Jefferson tipped his hot tea into his saucer to cool it, Washington is supposed to have observed, so too an Upper House (in this case the US Senate) performs a similar function with potentially inflammatory matters raised in the US Lower House or Congress.
There is however some conjecture about whether Washington actually said these words since apparently no one has ever seen this written quote until the late 19th Century when it was common place to tip your hot cup of tea or coffee into your saucer to cool it. In fact, the expression, ‘would you like a dish of tea’? originates from this practice. One can only cringe in sympathy with generations of hostesses who had to put up with the inevitable slurping of those guests who tried to drink their tea from their saucers, a receptacle actually designed for holding sauce.
The term ‘Bicameral’ refers to a government that has two chambers. The term apparently originated in the early 19th Century from the Latin ‘bi’ meaning two and ‘camer’(a or al) meaning chamber. The alternative is a single chamber of government or unicameral system.
While there is conjecture as to the efficiency of having a legislature comprised of two houses, the concept has been around since Ancient Roman times where the recognised tendency of the larger plebeian class could be tempered by the patrician Senate, a word reputedly derived from ‘senex’ or old man.
Most nations around the world have opted from a bicameral system of government. The map from Wikipedia below gives an indication of those nations that have bicameral government and those that don’t. 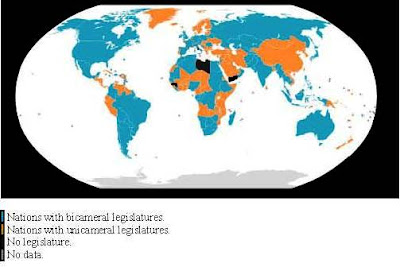 So how could an Upper House of Review be brought into being? Very easily.
Consider the Provincial Governors as a collective group of reviewers. Several have already raised their concerns about the current government and the speed by which Parliamentary votes appear to become law seemingly overnight. Why not determine that at the next general election, the Provincial governors be separated from the ordinary members of Parliament and become instead, a separate house of review as is the Australian Senate.
How would this work in practice?
Well, for one thing, I’m sure the incoming Provincial Governors wouldn’t mind a new title of say, ‘Senator’, a title not unknown and respected throughout much of the world.
Then the powers of the PNG ‘Senate’ could be modelled on similar powers elsewhere.
All legislation must first be reviewed and debated in the PNG Senate before being sent to the PNG Governor General for signing into law. Perhaps there could be a limit, as in Australia, where the Upper House can refer a draft Bill back to the Lower House three times before it must be passed and ultimately become an Act.
Surely this proposal is worthy of consideration from all sides of politics?
Posted by Malum Nalu at 4/16/2012 11:47:00 AM