Sister Jeneatte, Superior Sister of the Holy Spirit Sisters based at Alexishafen in Madang received an early Christmas present made up of medicine, hospital equipment and wheelchairs from Phoenix Pharmacy in Cairns.
The presentation was made at the Madang Resort today by Sir Peter Barter, chairman of the Melanesian Foundation (pictured below with the sisters) and the goods will be dispersed to various health services operated by the Catholic Health Agency in Madang and the Sepik, including Timbunke. 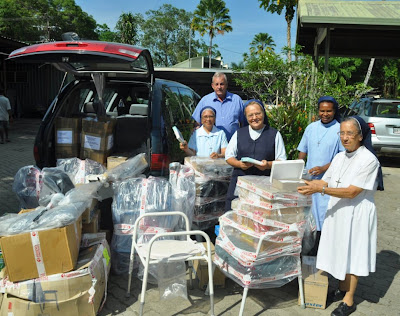 Sir Peter said that for a number of years Gillian Howard of the Phoenix Pharmacy in Cairns had donated medicine and medical equipment to PNG.
Previously Howard worked at Arawa prior to the coinflict and retains a great deal of respect to the people of Bougainville and PNG.
"The Kalibobo Spirit has just completed the annual slipping and survey in Cairns, and we were delighted to provide the transport free of charge," Sir Peter said.
"Regretfully,we are not a cargo ship, if we were, the Australians in Cairns would willingly fill a ship with schooldesks, hospital equipment, library books. sportts equipment and other basic items that would improve the quality of life to so many people living in remote regions of PNG  - regretfully the high cost of sea transport to Madang from Australia makes such donations very expensive.
"I am well aware of the great contribution made by the church health services in remote communities of PNG and I hope that in some ways the medicine and equipment will assist the Catholic Health Services in providing services to the people and making Christmas all the more special.
" I would also like to thank Phonenix, other donors such as Rita Fenske, Kyle Abela, my Sister Elizabeth who in the past have contributed much needed supplies through their various networking."
Posted by Malum Nalu at 12/04/2012 11:13:00 PM