An Australian pilot has died, along with his co-pilot and a passenger, when he flew into a mountainside in Papua New Guinea after reducing altitude in poor visibility, it has been reported.
Six other people survived the crash on Saturday, although one is in a critical condition.
The Hevilift twin otter aircraft came down about 10km from Goldie, near the capital Port Moresby. Officials from the Australian High Commission in Port Moresby said they have 'grave concerns' for a man following the crash.
It is believed the plane was chartered by a Catholic parish in Woitape, with parishioners on board and a pastor among the injured.

A Hevilift spokeswoman told Daily Mail Australia that the company 'swiftly commenced rescue operations and can confirm there are six survivors, one in critical condition'.
The passengers are being treated at Port Moresby General Hospital.
The spokeswoman added: 'Three tragically lost their lives.
'The company will be conducting a thorough investigation and is cooperating with all relevant authorities to determine the cause.
'The chartered flight was headed from Woitape to Port Moresby on Saturday morning.
'Hevilift's thoughts and sympathy go to the families of those who have died in the crash and the company will continue to provide every assistance to the survivors.'
The spokeswoman said the Australian killed in the crash 'was a very experienced pilot'.
Efforts to recover the wreckage of the downed plane has been suspended due to heavy fog and rain on the crash site.
Plans to airlift the bodies of those killed were also abandoned and are instead being transported to Port Moresby by road, PNG Loop reports.
Australian pilot among three killed in PNG plane crash 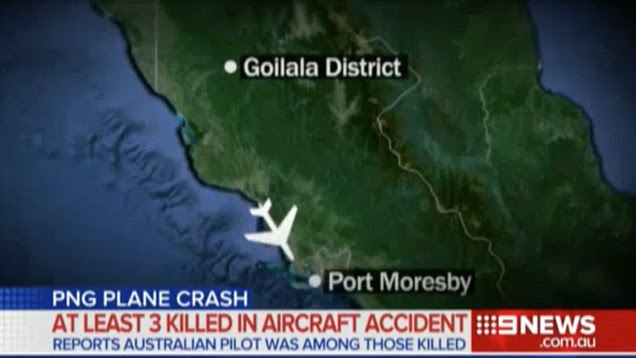 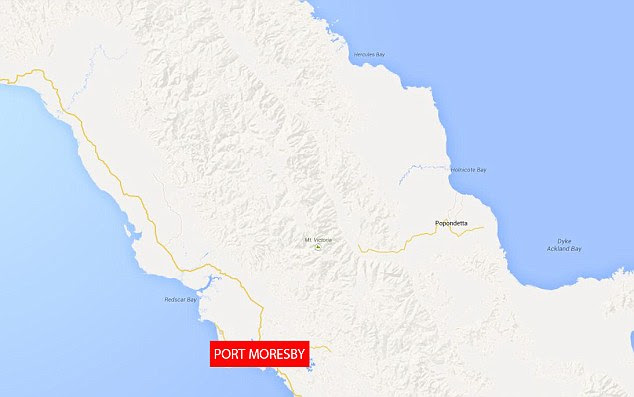 The flight had been travelling to Port Moresby from Goilala district
The chief executive of PNG's Accident Investigation Commission, David Inau, said the cause of the crash was unknown, reports ABC.
The flight had been travelling to Port Moresby from Goilala district.
He said: 'It's too early to say until [investigators] come back from the accident site," he said.
Emergency services and accident investigators are on site trying to find out what happened.
The Department of Foreign Affairs spokeswoman said officials from the Australian High Commission in Port Moresby are urgently seeking information from local authorities regarding the crash.
'The Department of Foreign Affairs and Trade is providing consular assistance to the family of an Australian man who died in a light plane crash in Papua New Guinea,' the spokeswoman added.
Police spokesman David Terry told media 'details are very sketchy at the moment' of the crash.
PNG missionary Matt Allen tweeted: 'Pray for my friends. "BREAKING: a Hevilift Twin Otter carrying up to 8 passengers has crashed 30miles from Port Morseby.'
A Catholic reporter in PNG tweeted: 'Downed plane chartered by Our Lady of Fatima Catholic parish of Woitape, Goi. Parishioners on board. Pastor Fr John Aihi among injured.'
Further tweets include: 'the pilot lowered plane due to poor visibility; immediately hit trees, terrain'.
'Survivor of Sept 20 crash: too late for pilot to regain altitude; front of aircraft smahed [sic] on the hill side and broke in the middle,' the Catholic reporter also tweeted. 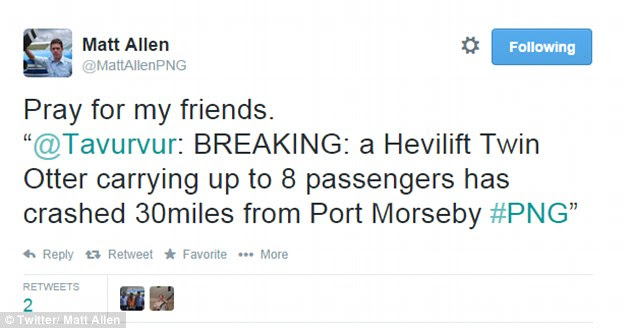 A reporter from PNG tweeted that the plane was charted by Our Lady of Fatima Catholic Parish
Since 2000 more than 20 planes have crashed in Papua New Guinea- the lack of infrastructure makes air travel crucial to the six million residents.
ABC reports that in July 2012, a chopper also operated by charter company Hevilift, crashed while flying from a drill rig site to Mount Hagen in the Western Highlands, killing two Australians and a New Zealander.
In one of the worst accidents, an Airlines PNG Dash-8 crashed 20 kilometres south of Madang in October 2011, killing 28 of the 32 people on board.
In June this year, the Accident Investigation Commission found that pilot error was a contributing factor in that accident.