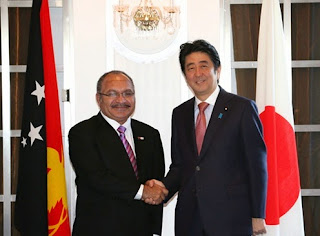 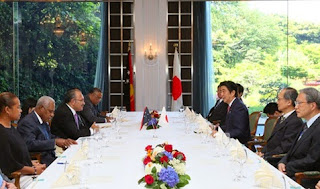 Trade and cultural exchange between Papua New Guinea and Japan will continue to strengthen through the advancement of issues discussed by the Prime Ministers of the two countries at a meeting in Tokyo yesterday.
Prime Minister Peter O'Neill and his Japanese counterpart, Shinzo Abe, met on the eve of the 7th Pacific Islands Leaders Meeting (PALM7) Summit in Japan.
During the working lunch the Prime Ministers discussed issues that included tourism, fisheries cooperation, development projects and tsunami awareness.
"It was a pleasure to meet with my honourable friend, Prime Minister Shizo Abe, as he prepares to host the very important PALM 7 Summit," PM O'Neill said.
"Papua New Guinea and Japan have a very rich partnership that creates opportunity for trade and investment, and also tourism.
"We are looking to create new opportunities for Japanese people to visit Papua New Guinea for leisure and historical visits.
"Papua New Guinea is the final resting place for many Japanese war dead.  While this part of our shared history began in a terrible war, as countries that are at peace, we extend the courtesy for relatives of to pay homage to their loved ones and ancestors.
"With Prime Minster Abe we have discussed establishing further memorials at important locations in Papua New Guinea.
"In relation to broader tourism activities, we are discussing work for the upgrade and expansion of Tokoak airport.  We hope this would lead to the possibility of direct flights from Japan to Rabaul.
"This is a perfect tourism destination of Japanese people looking to enjoy relaxing holidays on our beaches and experiencing our culture."
The Prime Minister said Japan and Papua New Guinea have agreed to further cooperation in the fisheries sector.
"Japan has tremendous opportunity for our fisheries sector and we are looking at options to improve this trade for the good of both countries.
"There are regional considerations we have to take into account in relation to fisheries and marine resources, so this is an ongoing discussion we will have with Japan as well as other island nations."
Japan has again pledged its support to development projects in Papua New Guinea that are helping to rebuild infrastructure and facilitate cultural engagement with Japan.
"I took the opportunity to express our appreciation to Japan for a range of projects that include national road improvements, agricultural capacity building and programs to deal with the affects climate change.
"Japan is providing 27 billion Yen (K600 million) to support ongoing infrastructure projects that include rebuilding work to increase the capacity of Nadzab Airport.
"A further 300 million Yen (K6.5 million) is being provided by Japan to assist in disaster management and preparation in Papua New Guinea.
"Japan has also allocated US$1.5 billion to the Green Climate Fund and is encouraging Papua New Guinea and other Pacific Island nations to utilise this facility in dealing with climate change."
During the meeting, Prime Minister Abe expressed his satisfaction with his State Visit to Papua New Guinea in 2014, and has invited Prime Minister O'Neill to undertake a State Visit to Japan where ongoing issues can be achieved and agreements reached.
The Prime Ministers discussed the possibility of holding the first Joint Committee meeting under the Japan-Papua New Guinea investment treaty as part of the program for this visit. In their discussion, Prime Minister O'Neill also pledged Papua New Guinea's support for Japan's proposal to establish an annual United Nations World Tsunami Day.
"Papua New Guinea fully supports the establishment of a United Nations World Tsunami Day on 25 November each year.
"This day would raise awareness amongst at-risk communities to prepare for the possibility of a tsunami and this will save lives.
"This day would also provide an opportunity to commemorate the lives lost to tsunami's in Japan, Papua New Guinea and right around the world."
The PALM 7 Leaders Summit will begin in Iwaki-city, Fukushima prefecture, today and conclude on 23 May.