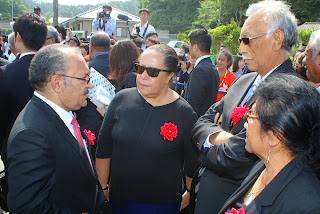 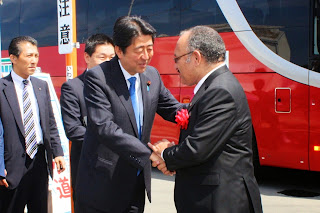 Prime Minister Peter O'Neill  has joined fellow Pacific Leaders in commemorating the tragic loss of life that occurred following the Japan's East Coast Tsunami in 2011.
The commemoration was led by Japan's Prime Minister, Shinzo Abe, near Iwaki in Fukushima Prefecture, as part of the 7th Pacific Islands Leaders Meeting (PALM 7) being held in Japan.
O'Neill made special note of the resilience of the survivors in the town, and said they share a special bond with survivors of the Aitape Tsunami that occurred in Papua New Guinea 1998.
"Our thoughts and condolences go to the families who lost loved ones in the tsunami, and to the survivors who suffered as a result of the disaster," the Prime Minister said at one of the locations where the tsunami struck in Japan.
"While we can see the aftermath of the tsunami and the destruction that it leaves behind.
"Only those people who experienced a tsunami can fully understand the power and the horror of the waves as they destroyed this town in Japan and villages up and down the coast from Sissano Lagoon in Papua New Guinea.
"We remember the lives lost and the lives ruined by these terrible events."
O'Neill said lessons have to be learned from disasters such as tsunamis, this includes clear planning and strategies implemented to preserve life and property.
"We cannot stop tsunamis but we can work together to develop ways to reduce their impact on communities.
"New technologies are making it easier to ensure that people can receive tsunami warnings and take action.
"People in places that are at-risk need to be ready to act at a moment's notice when a tsunami warning is issued.
"Public education is essential in saving lives in these disasters and Papua New Guinea supports Japan's proposal to have an annual United Nations Tsunami Awareness Day."
Floral wreaths were laid at the disaster area that is now undergoing extensive rehabilitation and defences established to protect against future tsunamis.
PALM 7 was hosted by Prime Minister Abe and the President of Palau, Thomas Remengesu Jr, in Iwaki on 22-23 May 2015.