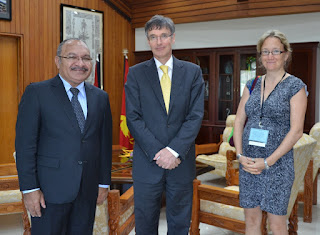 Prime Minister of Papua New Guinea Peter O'Neill  has thanked the outgoing Head of Delegation for the European Union, Ambassador Martin Dihm, for his support to the nation during his appointment.
Ambassador Dihm will complete his posting to Papua New Guinea in July after four years in the position.
O'Neill said Ambassador Dihm has helped strengthen relations between Papua New Guinea and the European Union on a number of issues.
"During Ambassador Dihm's posting to Papua New Guinea we have seen in increase in trade and investment, and a strengthening of cultural relations with Europe," the Prime Minister said.
"I thank Ambassador Dihm to his contribution this increasing engagement with Europe."
The Prime Minister said there have been sensitive issues between Papua New Guinea and the European Union in recent years, and the EU mission in Port Moresby has worked with the Government to overcome challenges.
"The implementation of the Interim Economic Partnership Agreement and the dialogue on compliance with the EU regulation on fishing are progressing very well.
"The iEPA has created over 30,000 direct jobs, many of these being for women, as well as many more indirect jobs.
"The ongoing dialogue covering illegal, unreported and unregulated fishing continues to move forward and we expect to have further positive news soon.
"Papua New Guinea will also continue to widen and deepen the list of tradable goods that we export to Europe.
"This will move from canned tuna to include other products like coffee, cocoa, coconut, minerals, processed timber and petroleum products.
"Papua New Guinea also appreciates the ongoing technical support that we receive from the EU and we recognize the important partnership that we have with Europe.
"I wish Ambassador Dihm our country's best regards for his future appointments and trust that he will remember his posting to Papua New Guinea with great fondness."
The Prime Minister received the courtesy call form Ambassador Dihm on Tuesday, 7 July 2015.