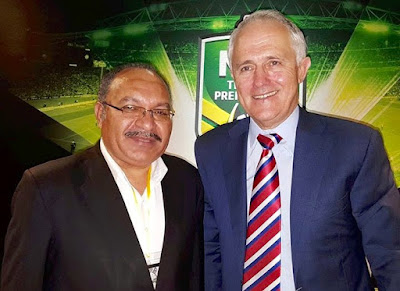 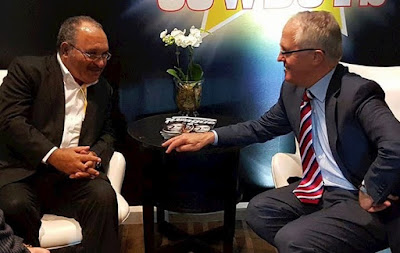 Prime Ministers of Papua New Guinea and Australia discussed a range of issues of mutual interest including climate change, development support and APEC preparations, during their meeting in Sydney on the eve of the NRL grand final.
This was the first meeting since Malcolm Turnbull was elected as the Australian leader, and Papua New Guinea's Prime Minister, Peter O'Neill, said he was confident the relationship between the two countries would continue to go from strength-to-strength.
"I congratulated Malcolm Turnbull on his election as the Prime Minister of Australia and look forward to working closely with him and his Government in furthering our relations,"  O'Neill said.
"I have every confidence that our countries will manage the range of issues that confront our region in a progressive manner.
"We discussed issues relating to climate change, particularly the recent Declaration by the Pacific Islands Forum Leaders.
"Mr Turnbull expressed his support and agreed that Australia should provide leadership and support on climate change issues.
"This is particularly important considering the gravity of the climate change in the way it affects to many of the smaller island countries.
"The upcoming COP-21 meeting in Paris is an important forum and Australia will actively participate in this discussion."
The two prime ministers also discussed the review of advisory and technical assistance provided by Australia.
"Our intention remains to change foreign advisory roles to become contract positions.
"This will achieve greater accountability and value for both countries.
"We anticipate that by December this year that these advisory roles will be converted to line positions, including the Policing Program with the Australian Federal Police."
O'Neill said his Australian counterpart was very well briefed on economics and politics in Papua New Guinea and acknowledged the National Government's work to deliver progress and development around the country.
Turnbull also offered his ongoing support to PM O'Neill's Chairmanship of the Pacific Islands Forum over the following year, and for Australia's support to Papua New Guinea in hosting APEC the Leaders' Summit in 2018.
"We are advancing our preparations to host APEC in 2018 and Australia will be an essential security partner as we welcome the Asia-Pacific leaders to Papua New Guinea."
O'Neill invited Prime Minister Turnbull to visit Papua New Guinea at a time of his convenience and he agreed to do so.
Posted by Malum Nalu at 10/06/2015 08:47:00 PM