Port Moresby, May 25, 2018 – UN representatives visited earthquake affected communities in Hela, Southern Highlands and Western provinces from May 22-23 to see, first-hand, the impact of the earthquake and UN response activities in the field. 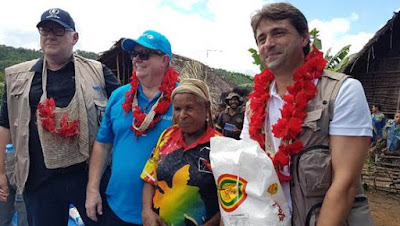 Gianluca Rampolla, UN Resident Coordinator in PNG along with David Mcloughlin, Country Representative, UNICEF PNG and Robert Dekker, Emergency Coordinator, UN World Food Programme (WFP) met with communities in some of the most severely-affected communities to talk about their needs and also distributed food and other relief items.

Talking to the UN team, a community representative in Seana Falls, Southern Highlands, said “This disaster has brought great suffering for the people in the Highlands. But it is also an opportunity to draw attention to remote communities like ours which remain disconnected from the rest of the country. We are happy that we were not forgotten.” 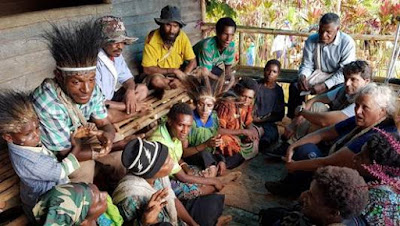 “Our houses were bagarap (damaged) during the big quake and food gardens were destroyed by landslides. All the adults and children including my son were very afraid that the ground would fall away”, recounted Robin Dern a village spokesperson in Huya, Hela.

Dekker said: “By using helicopters, we’ve been able to reach the most remote and food insecure communities in isolated mountainous areas cut off by the earthquake. The scale of the damage caused by the earthquake and the needs of those nearest the epicenter are significant. Our partnerships with local communities, government authorities and the private sector mean we’ve been able to reach those most in need.”

Speaking with communities, Mcloughlin, said: “I am deeply touched to witness the manner in which each member of the community has stayed together so strong to support each other and rebuild during such devastating times…. whilst at the same time being sensitive to the special needs of young children, pregnant mums, the sick and the elderly.” 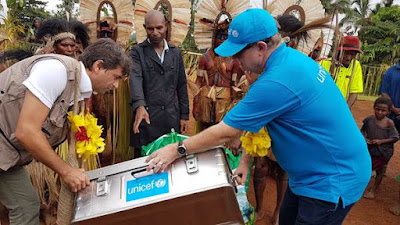 Concluding on his visit, Rampolla said: “I would like to express my solidarity with the affected communities. I am happy and humbled to see that the UN has been able to reach out and help people at this time of need. I am deeply inspired by the resilience of the people and their resolve to rebuild their lives in such challenging circumstances.” He further said: “I would also like to sincerely thank Oil Search for their tremendous relief efforts and excellent support to the UN’s humanitarian work”.

The earthquake that hit PNG on February 26, destroyed livelihoods and infrastructure and affected 270,000 people. The UN, in close coordination with the Government, humanitarian community and private sector, launched a humanitarian response in March 2018 to meet the immediate needs of the most affected communities in Hela, Southern Highlands and Western provinces. So far, the UN has reached more than 21,990 people with food assistance, 27,000 people with clean water and 2,930 people with shelter and non-food items. Air operations led by WFP has enabled United Nations agencies to reach remote communities with critical humanitarian assistance despite the logistics and security challenges involved in road transport.

2,600 children benefitted from the safe temporary learning spaces, 8,362 children were immunised for measles/rubella and 5,800 children were screened for severe acute malnutrition. 600 women were provided dignity kits.

The UN continues to support the PNG Government with humanitarian and logistics coordination for the earthquake response, working closely with the National Disaster Centre and the Office of the Emergency Controller.
Posted by Malum Nalu at 5/27/2018 10:10:00 PM