Daru runs dry as all attention on Apec

By HANS MESSEA of NBC in Daru

Daru town residents are continuing to be  badly hit by the ongoing water crises.
Last week,  the raw water mains on the island terminal were vandalised,  causing a disruption to the water supply to Daru . 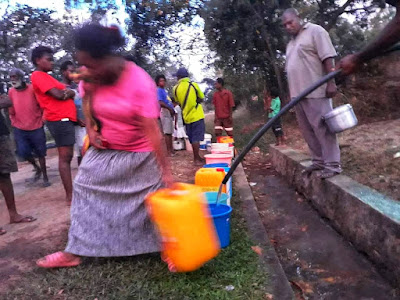 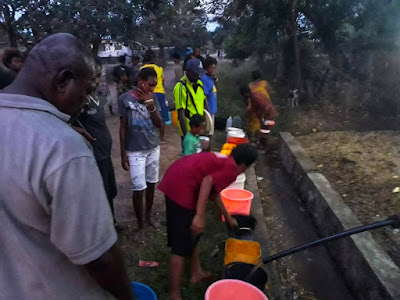 The piping has gone rusty,  and was easily unbolted,  resulting in water shooting upwards and causing the closure of the water supply.
It is the beginning of the dry spell and most of the dugout water wells and the tanks have gone dry.
People are now resorting to paying for  water from the wells owned by a few residents for K1 or K2 per container.
Other people are fetching water
for cooking and drinking from bore water.
There are health risks again because the
bore and well water is not treated.
The Water PNG office in Daru has made a public appeal to those tampering
with the pipes to stop vandalising such vital assets that serve the community.
Currently workmen are attending to the  damages which is into the
deeper part of the sea.
Work has to be carried out when the tide is
low.
Water will be restored as soon as the job is completed.
Posted by Malum Nalu at 9/04/2018 01:55:00 AM