Taipei, Oct. 4 (CNA) China has been deploying a number of "little tricks" over the past few months to inhibit Taiwan's participation in this year's Asia-Pacific Economic Cooperation (APEC) meeting but to scant effect, Foreign Minister Joseph Wu (吳釗燮) said Thursday. 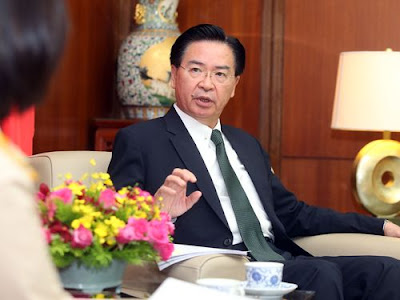 In an interview with CNA Thursday, Wu said China has made several attempts to introduce its "one-China" principle, under which it sees Taiwan as part of its territory, into APEC's operating framework.

For example, he said, China has asked that references to Taiwan in APEC documents be changed to "Chinese Taipei," the official title used for Taiwan in APEC.

China has also tried to blocked many of the proposals made by Taiwan in APEC this year, he said, adding that such issues were resolved after Taiwan sought help from like-minded member countries.

Those "little tricks" by China have caused some small twists and turns but will hardly affect Taiwan's overall participation in APEC, Wu said.

In keeping with protocol, the 2018 APEC host country, Papua New Guinea, has sent envoys to Taiwan twice with an invitation to this year's leaders' summit, he said.

Taiwan joined APEC as a full member under the name Chinese Taipei in 1991 and has played an active role in the annual meetings, seeking to enhance interaction with the other 20 member economies, according to the foreign ministry.

Commenting last month on the issue, Matthew J. Matthews, deputy assistant secretary and U.S. senior official for APEC, told CNA that the United States has always been supportive of Taiwan's full membership in APEC and is making sure that status will not be compromised.