Prime Minister James Marape says his Government is taking an even bigger burden off the shoulders of parents by introducing the K200 million students’ tertiary loan scheme in 2020.

He said this when addressing a fullhouse crowd at the Pacific Adventist University (PAU) graduation at its Koiari Park Campus outside Port Moresby today (pictured below) . 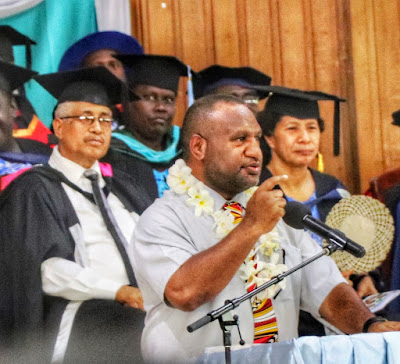 They applauded when Prime Minister Marape made the announcement.

“Next year onward, we will have the students’ loan programme,” he said.

“No more will you pay (tertiary) school fees.

“As long as you have NID (national identification) and residency as a Papua New Guinean, you will go and get money for your school fees.”

Prime Minister Marape said parents would pay 50 per cent of school fees from elementary to secondary school, with the Government to foot the balance, until students were ready for tertiary education.

He said the money would be parked under a programme known as HELP – Higher Education Loan Programme – “where we will have funding easily available to assist our students pursue higher education”.

Prime Minister Marape said he had heard many people complaining, since the 2020 Budget was delivered last Thursday, about Government reducing funding for primary and secondary schools.

“I put it back to them: Which is most-burdensome? Is it high school or primary school education, or university and college education?” he said.

“I think university or college education is more-burdensome – that is where we are stepping in right now.”

Prime Minister Marape said those who dropped out of Grades 8, 10 or 12 could be easily absorbed by vocational schools or SME training that would be made available.

“Government wants to do all of these things, but Government alone cannot do it,” he told the graduating students.

“Government and your country needs an army of responsible citizens, who are out there making it happen for our country.