Prime Minister James Marape says Papua New Guinea welcomes any investments in the petroleum sector.
He said this during a meeting with representatives of Japanese investor, LNG Japan Corporation, in Port Moresby last week.
The LNG Japan delegation was led by President and CEO Hiroshi Kawahara (pictured below with Prime Minister Marape). 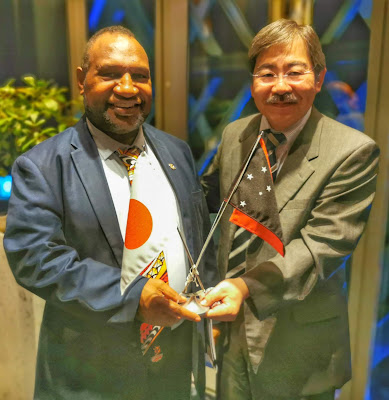 LNG Japan is studying feasibility of potential LNG-to-power projects in PNG, leveraging its long experiences in the LNG industry, including a small-scale domestic LNG sea transportation project in Indonesia.
It is also looking at producing methanol as a raw material for plywood manufacture, hence, contributing to downstream processing of logs.
National Planning Minister Sam Basil (who is responsible for Kumul Petroleum Holdings Ltd), Commerce and Industry Minister William Duma, and KPHL Managing-Director Wapu Sonk also attended the meeting.
“I will give 100 per cent support if you show me that you can create employment,” Prime Minister Marape said.
“I don’t mind giving you a tax-holiday, if you can create employment for our citizens.”
Prime Minister Marape welcomed LNG Japan Corporation plans to operate in Kikori, Gulf, where a Special Economic Zone is planned to be built.
“We want to create cheap electricity for the whole country over the next 10 years,” he said.
“This is why we are pushing for a minimum 10 per cent of any gas found in the future.
“Kumul Petroleum will pick up this 10 per cent and use it.
“We will want to create by-products from this gas, but first and foremost, is cheap electricity.”
Prime Minister Marape told Sonk to continue discussions with LNG Japan Corporation and keep Ministers Basil and Duma in the loop
LNG Japan Corporation, established in 2001, is a 50-50 Venture between two leading Japanese trading companies, Sojitz Corporation and Sumitomo Corporation.
LNG Japan, from the days of its predecessor, has over 40 years of experience in upstream development, financing, marketing, trading and shipping in the global LNG Industry.
LNG Japan and Kumul Petroleum entered into a joint venture agreement on June 7, 2017 (amended on August 2, 2018) to set up the unincorporated joint venture for marketing of spot and short-term cargoes from PNG LNG.
The company, together with JX Nippon Oil and Gas Exploration Corporation and Marubeni Corporation (Japanese consortium) and Kumul Petroleum entered into a memorandum-of-understanding on August 30, 2018, to jointly pursue any opportunities to participate in the Papua LNG Project, as equity participants and financiers.
***
Posted by Malum Nalu at 12/09/2019 08:24:00 PM