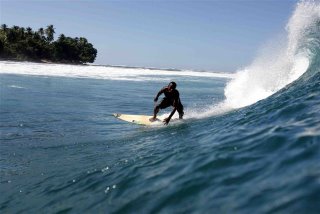 Surf's up in PNG
SURFING in PNG is entering an exciting period next year as the sport celebrates 20 years in the country.

Apart from the gala celebrations, the national titles – which will be used to select the national team for the Pacific Games in Samoa – will be staged at Lido Beach in Vanimo, West Sepik province, next January.

Coinciding with the 20th anniversary and the national titles will be the launch of an innovative three-year strategic plan for the Surfing Association of PNG, which was drawn up by a World Bank consultant.

This plan – which will serve as a roadmap for implementing strategies and achieving goals – is indeed a landmark for sport in PNG.

TheWorld Bank came into the picture after noticing the internationally- unique “bottoms up” approach developed by founder Andrew Abel.

“The national titles will be held at Lido village in Vanimo from Jan 10 to 15,” PNGSA president Abel said.

“We estimate between 100 and 200 surfers competing in all divisions.

“We will have junior boys and girls, open men and women, and ‘lapun’ senior masters division for those over 35.

“The team, plus management and coach, will be sent to the Surfing Australia High Performance Training Centre on the Gold Coast.

“The reason for this is to expose our elite surfers to the rigours and demands of physically and mentally preparing for high-performance competition surfing under the guidance and training of Glen Elliot, head surfing judge, and Sasha Stocker, head surfing coach of Surfing Australia.

“It is further planned to have our elite surfers billeted by Australian surfing families and to compete on the weekend surfing circuit, and work part-time in established surfboard manufacturing factories to learn the art of shaping and glassing a surfboard, and how the shape and measurements of a board affect the performance of a surfboard in the water.

“The surfers will then return to PNG and then do another one-month round of training prior to departing for Samoa in August.”

The whole event will be covered by a surf documentary filmmaker Adam Pesce, who was here in 2003 to document the history and evolution of modern surfing in PNG.

“It is the plan of the Surfing Association and Pesce and his film crew, to also document the young elite surfers during the national titles through to their training in Australia, to Samoa Pacific Games, and back again to their respective home towns,” Abel said.

“The documentary will be the culmination of 20 years of promoting and developing surfing as a sport; and surf tourism as a growing niche tourism industry with our young elite surfers as ambassadors of PNG.”

PNG found the perfect wave in 1987 when young Abel, third-generation of the famous Abel dynasty of Kwato Island, set up a club in Vanimo with an enthusiastic bunch of novices.

From those humble ripples, the PNG Surfing Association is now a growing wave.

“The surfing association was essentially set up by a bunch of young surfers, primarily local surfers, 20 years ago,” Abel recalled.

“We became affiliated to the PNG Sports Federation as a sporting body and then the International Surfing Association, which is based out of California, United States.”

From those humble beginnings, with an office situated out of the late Sir Cecil Abel’s residence at Waigani, the fledgling PNG Surfing Association worked to promote surfing – first and foremost – at the grassroots level.

“Our pioneering surf club was the Vanimo Surf Club, based out of West Sepik province, in Lido village, in 1988,” Abel said.

“From those humble beginnings in Vanimo, I spent a lot of time flying to and fro with my girlfriend at that time, Francesca, who is now my wife.

“She is instrumental with me in sitting down with the young Vanimo surfers to introduce surfing.

“At that time, they were only surfing with bellyboards, and through their enthusiasm, I started to donate my own boards and then the senior surfers started to pick up the sport, started surfing the real fibreglass boards.”

Abel approached the village councillors as well as John Tekwie, at that time Sandaun governor, who later became the patron of the association.

“Basically, my approach is unique in the surfing world, and it’s been confirmed by people who come into the country,” Abel added.

“The approach was based on what I called the ‘bottom up’ approach, whereby the surfing association works in collaboration with the respective village communities and we set up an affiliated surf club, in this case being Vanimo Surf Club.

“Vanimo Surf Club are owned and operated by the local surfing community.”

"They are affiliated to the Surfing Association.

“And through this ‘bottom up’ approach, the local village community can access tourism through our affiliations with our surf tour operators in Japan and Australia – which are our primary markets – and our close working ties with Air Niugini and the Tourism Promotion Authority.

“And this is the unique thing about this ‘bottom up’ approach where Surfing Association are working within our constitutional framework, which is also listed in our goals and objectives posted on our website www.surfingpapuanewguinea.org.pg.”

To cut a long story short, such has been the interest in the way PNG Surfing Association are going about that a student at Plymouth University, England, recently did his PhD thesis on sustainable surf tourism in PNG.

Surfing in PNG have indeed found that elusive ‘perfect wave’ that all surfers dream about.For more information about surfing in PNG, log on to www.surfingpapuanewguinea.org.pg .
Posted by Malum Nalu at 12/01/2006 12:28:00 PM