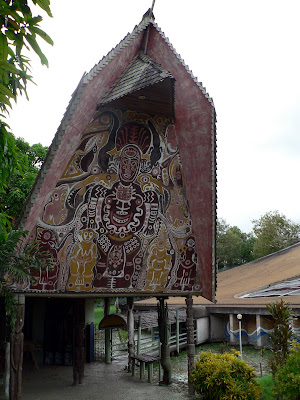 Welcome to the depth and diversity of Papua New Guinea in the National Museum and Art Gallery.

The Papua New Guinea National Museum and Art Gallery is the “spiritual house” for the rich natural, cultural and contemporary heritage of this country.

It consists of three premises which are the main museum located at Waigani in Port Moresby, the Mordern History (sometimes known as War Museum) at Gordons in Port Moresby, and the J.K. McCarthy Museum at Goroka in the Eastern Highlands Province.

The main museum at Waigani consists of five display galleries which are the Masterpiece Gallery, the Independence Gallery, the Sir Allan Mann Gallery (for temporary exhibits), Life and Land (natural history and prehistory) Gallery and the Sir Michael Somare (new acquisitions) Gallery.

It is one of the “must visit” icons of Port Moresby like the neighbouring National Parliament and the National Capital District Botanical Gardens at Waigani.

It is closed to the public on Saturdays except for organised visits.

The collection includes aircraft, vehicles and war artifacts from pre-independence and post-independence.

Some of the unique objects in the national collection include a P-38F Lockheed Lightning aircraft, the oldest P-38 in a museum in the world.

It also has offices for scientific and administrative staff, a storage room and a gift shop.

Its main collections are artifacts and specimens from the Highlands region.

This gallery features a stunning Kula canoe from the Trobriand Islands of the Milne Bay Province.

Traditional musical instruments and a variety of PNG’s renowned kundu and garamut drums are also on display.

This gallery brings to you a unique selection of the museum’s most-important cultural objects in terms of religious significance and aesthetic excellence.

In this collection are tall posts from the Sepik which are used to decorate haus tambarans (spirit houses), ancestral boards from the Sepik and intricately-carved Malangan masks from New Ireland.

It was opened in 1986 with an exhibition of Independence and State gifts Sir Michael received over the years.

This exhibition records the lives of the early inhabitants of New Guinea who arrived up to 50,000 years ago.

Archeological excavations have revealed the early Highlanders were among the world’s first farmers.

Within this gallery is a colourful collection of preserved bird specimens including a variety of birds of paradise, while seashore to mountain diorama shows the variety of PNG vegetation and wildlife from the swampy mangroves to the cool of the Highlands.

This gallery is named in honour of the Museum’s first Chairman of the Board of Trustees.

The gallery makes the display of traveling and temporary exhibitions possible.

This gallery has displayed a variety of important exhibitions over many years.

Right in the heart of the museum is an enclosure of live birds and animals including hornbills, parrots and ducks.

The museum bookshop is located at the front of the entrance.

The bookshop sells a variety of carvings, bilums and cards as well as books on Papua New Guinea, which are excellent gift ideas.

A pleasant shady courtyard/reception area is also available for hire at a reasonable rate.

Within the museum is a small multi-screen lecture room, normally used for educational activities and a theatre that can hold up to 250 people.

These are specialised scientific and research areas that carry out the main functions of the museum’s heritage and cultural collections.

Please be aware that an export permit is needed to take artifacts out of the country.

The permit, as gazetted under the provision of the National Cultural Property (Preservation) Act, is issued at the National Museum.

To obtain a permit, consult the museum and provide either the artifacts or a photograph for inspection.

If the items are permitted exports, an export permit will be issued.

Email ThisBlogThis!Share to TwitterShare to FacebookShare to Pinterest
Labels: museum