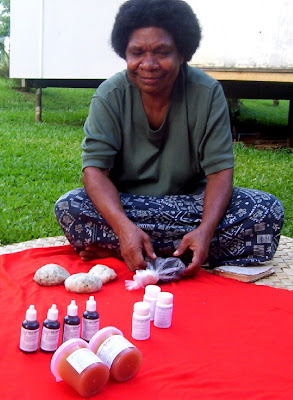 If Dr Quinn is television’s “medicine woman”, then Minnie Bate is Papua New Guinea’s answer to her.

She shot to prominence at the PNG-Made Trade Fair in Lae in 2003 when she won awards for “Small Business Encouragement” and “Best New Product” and has since never looked back.

The sky is now the limit as she awaits clinical trials and certification of her herbal products by an independent international team of scientific researchers.

“The ball is now in their court,” she tells me.

“Appropriate license will be issued upon show of evidence of clinical trials.

“That’s when the real business begins.”

All these are produced at her humble backyard.

She was enjoying a quite cup of tea on a typically-beautiful Milne Bay afternoon at her home at Goilanai Heights in Alotau when I drove in unexpectedly for a chat.

Her products are selling well all over the country, with Popondetta, Lae, Port Moresby and Madang leading the charge.

“I have reports from people in high places, especially ladies, who have opted to use our products,” Mrs Bate tells me.

“They have found out that our products are better and also cheaper.

“They have done away with imported products and are using our products.

“Our fastest seller is the soap, sales of which are really picking up.

“We successfully treated it using the traditional medicine we are now using in our products,” she recalls.

“We conducted research into all techniques, products had to be tried out and modified where necessary.

“Over the years, we developed a list of all sorts of problems this product could treat like asthma, arthritis and all forms of skin diseases.

“In year 2003, we participated in the PNG-Made Trade Fair in Lae and we were recognised by being awarded ‘Small Business Encouragement Award’ and ‘Best New Product’.

“That really opened up another chapter where we have to now look seriously at what we can do to get our products recognised by the Health Department.

“We were taken to all kinds of workshops by different organisations, including one on traditional medicine.

“This was more or less the Government recognising what we were doing.

“I think it was also a World Health Organisation direction to look at traditional medicine in the region.”

Mrs Bate was trained as a medical technologist at the then Papuan Medical College in 1972 and 1973, worked for eight years with the Health Department, and then went back to the same school from 1980 to 1983 where she completed her Diploma in Medical Technology.

She then joined the Department of Agriculture and Livestock and taught basic science, nutrition and health to diploma students at the Vudal Agricultural College outside Rabaul from 1986 to 1990.

She then moved over to the Popondetta Agricultural College from 1990 to 1996 “when I stopped because of this thing (herbal medicine)”.

“While I was teaching,” Mrs Bate confesses, “I was also doing my personal research.

“When I finished from the public service, the product was already there and just had to be developed.

“A company was established in 1993 called Pomins Ltd.
“That happened during my long leave.

“While working, I was selling and promoting my products.

“Most of my promotion happened in Oro Province.

“Here I was, trying to create a change of attitude in people from imported medicine to traditional medicine.”

Mrs Bate’s big break came in 1995 when she attended a workshop in Fiji on traditional medicine.

“It was quite exciting.”

In 2002, she attended further workshops in Vanuatu and Fiji, where she learned about how seaweed could be blended into her products.

“I successfully produced seaweed-based products blended with herbs, mainly for face and baby care creams, as well as soap, which are now in high demand.

“The soap production thing has now evolved into a community-based project, as people have coconuts as resources we need to produce coconut oil for soap.”

Mrs Bate, despite being pressed, would not reveal the ingredients or recipes for her products – which are a closely guarded trade secret.

Everything is produced in her backyard with the help of a very-supportive husband from Bubuleta village on the East Cape of Milne Bay, as well as her four grown-up sons.

“I depend on my family for support,” Mrs Bate says.

“From the very beginning, they understood that I was trying to develop traditional medicine commercially.

“I have a very understanding family which has stood behind me in very tough times.

“Once I get my license (when the products are certified), I can do business in a big way.

“That’s when employment will come in.”