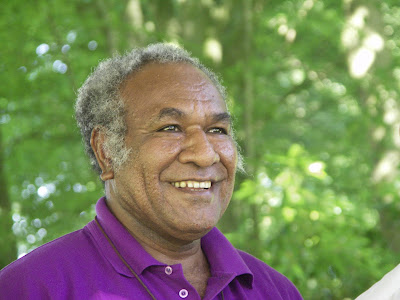 The Evangelical Lutheran Church of Papua New Guinea, one of the largest mainline churches in the country with up to 1.2 million followers, is mourning the sudden death of its charismatic leader – the American university educated Bishop Reverend Dr Wesley Kigasung – who passed away early today (Thursday, May 15, 2008) aged 57.

He will be remembered by Lutherans all over the country for his skills as a preacher of the Word of God.

He was born on July 16, 1950, and is married to Susie Manempen Kigasung of Mindere village in the Rai Coast area of Madang Province.

The Kigasungs are blessed with two daughters and two grand daughters.

The young Wesley Kigasung received primary education in remote Menyamya and later on Siassi Island where he did secondary schooling at Gelem High School (now Siassi High School) from1966 to 1968.

Kigasung attended Martin Luther Seminary from 1970-1975 and graduated in 1975 with Diploma of Theology and Bachelor of Theology.

He received further studies at the University of Papua New Guinea in Port Moresby from 1976 – 1978 and graduated from the University in 1979 with the degree of Master of Arts majoring in history of PNG).

From 1979 to 1980 he served as Circuit Pastor in remote Kaintiba, Gulf province.

In 1981 Kigasung was called to teach at Martin Luther Seminary in Lae until the end of 1982.

In March 1983 he left with his family for Germany for language studies.

Towards the end of 1984 he again left for further studies in Chicago, USA, where he graduated in 1986 with the degree of Master of Theology at the Lutheran School of Theology in Chicago.

Kigasung continued studies for his doctoral degree and completed all doctoral work in 1989, when he received the degree Doctor of Theology from the Lutheran School of Theology in Chicago.

He resumed work as Lecturer at Martin Luther Seminary towards the end of 1989.

In 1991 he was appointed Principal of Martin Luther Seminary and served as Principal until 1997.

In January 1998 Kigasung was elected Head Bishop of the church at the Kimbe Synod.

Kigasung is widely respected as an intellectual and a leading preacher of the word of God in this country.

“From my early years in school I already developed the skill of speaking in front of my peers.

“Through the years I have challenged myself to develop my abilities in order to serve well.

“I like to read a lot and I have read lots of books on leadership and other books that help to develop my skills in working and communicating with people.

“My philosophy in life is to do well in a given task; to face life and responsibility without fear and doubt; to take criticisms and face difficult situations with humility and respond with positive attitude and be more proactive rather than being reactionary.”

Kigasung says being the spiritual leader of all Lutherans is not an easy task but he finds so much joy in serving God.

“It is not easy,” he says frankly of his job.

“But there is much joy and satisfaction in serving God's people.

“I find much joy in meeting people of different cultures and different works of life and back ground and of different nationalities.

“You see and experience God's wonders and life in the faces of these different people in the church.

“I leave my future in God's hand.

“This is my last term as Head Bishop.

“I hope and pray that the Lord will grant me good health and strength to serve him in another role after this final term as bishop.”

From January 9 to 13, 2006, the ELCPNG held its 25th Synod at remote Wasu in Morobe province, where Dr Kigasung was reelected for a third four-year term.

The first Synod was held in 1956 at Simbang, Finschhafen, the site of the first landing of the pioneer German missionary Johannes Flierl in 1886.

The first Head Bishop of the newly founded Church, the Evangelical Lutheran Church of New Guinea (ELCONG) was elected in 1956.

He was an American missionary, the Reverend Dr John Kuder.

Dr Kigasung was reelected at a time where there is splintering within the church through the Lutheran renewal movement; when there are criticisms from within the Church itself that it has become sluggish and has been sidetracked from fulfilling its greatest mission of spreading the word of God; that it has become so vocal on business matters without paying any attention to evangelism, ministerial training, health, education and the welfare of its pastors and evangelists; and there has been talk about the creation of a Lutheran university in Lae.

So what of the future?

“The major plans for the future of the Church is to revisit the mission of the church; to revitalise the church to become more responsible and accountable in financial matters; improve leadership responsibility; improve pastoral responsibilities as well as addressing the concerns of the pastors and other church workers.

“I encourage all Lutherans to share their faith in the many gifts and talents that they possess to help build the church.

“I want to introduce to the church the theme for the new period of this church for the next 50 years.

“I want to challenge all genuine and committed Lutherans with the theme: ‘Sharing the Faith, Building the Church’.

Email ThisBlogThis!Share to TwitterShare to FacebookShare to Pinterest
Labels: kigasung