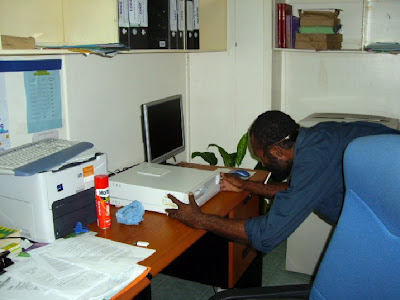 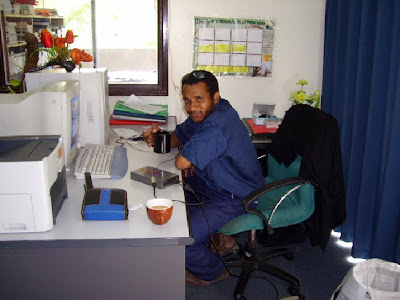 Young Papua New Guinean computer specialist Panu Kasar, who runs the PC Clinic, advises that it is wise for all computer users to be equipped with the latest anti-virus software and fixes to counterattack this flood of cyber pests flooding our computer networks.

“Computer viruses are dangerous and can cause millions of kina loss in income and profit because of the society’s dependence on computers,” he says.

“Preventing loss is wiser, so be equipped with a reliable anti-virus as soon as possible.

“All computers must have at least anti-virus software installed on the PC configured to scan threats that may infect the computer,” he says.

“Anti-viruses such as Norton, Symantec, AVG, need the Internet for updating because they have live update feature.

“This means that when connected to the Internet a user must activate the automatic update feature for latest updates to be installed.

“Updating definitions is important because anti-viruses are designed to go weak after a month.

“This is a strategy used by the manufacturers to monitor viruses because once a user connects to the net for monthly updates the manufacturers have access to your PC to record the number of viruses you have detected in your PC.”

A virus is software designed to corrupt system files.

It is made to disrupt or deny basic services the computer would need to use to function.

They act as low level computer processes which make some anti viruses hard to detect as they are seen as normal system processes.

Usually they infect a PC rapidly that you won’t notice.

It may take hours to scan and clean an infected computer but takes a second or two to be infected again once an infected USB drive is inserted.

The transferable nature of viruses has caused government departments millions of dollars due to loss of data by destructive viruses.

Viruses are highly dangerous and can cause computers to crash.

Some viruses are designed even to corrupt and disable anti-virus software installed in the victim’s PC.

“Spyware is malicious software planted on your computer by marketing companies.

“It is designed to monitor your Internet activities, collect your personal information and can even reach sensitive data like your private passwords, emails and credit card details.

“If your PC is infected with Spyware all your keystrokes, visited websites and even conversations can be recorded or monitored by someone who had secretly installed spy software on your PC.

“Spyware is usually bundled with software downloads, attached to e-mails, or transmitted through networks.

“That’s why many anti-virus programs define it as legitimate software.

“Once installed, it can be hard to remove, and therefore, your computer will remain infected and your privacy will be at risk for a long time.

“Originally it was designed by advertising and marketing companies to monitor behaviour of internet surfers.

“Trojans infections are mainly seen when using the Internet without a reliable firewall.

“Trojans filter through networks rapidly, can cause harm to data and stops access to files.

“Like the traditional Trojan horse story of Greek mythology, they become a resident of the victim’s PC and allow hackers access to your computer.

“They also create or clone more viruses when they reside in your PC.

“When the PC becomes a host to a Trojan it invites more viruses who are attracted to it.”

“This was originally was used by administrators to find loop holes in the networks.

“They filter through networks rapidly and can also duplicate themselves on removable storage devices.

“Recently, worms have been modified by cyber criminals to act also as viruses and can cause system crashes in large networks.

“A good example is the Brontok worm which has both characteristics of a virus and a worm. “

Mr Kasar said computer viruses had increased rapidly in PNG in recent years due to the increase in computer usage.

“Viruses are now very readily transferable due to certain factors and changes in the ICT environment,” he says.

The widespread use of USB storage devices - Today the use of USB flash drives, iPods, MP3/MP4 players, external hard drives, mobile phone storage and also digital camera storage devices is widespread. These are portable and can be carried around and used in any computer. It is a precaution to scan all USB portable devices with a reliable virus scanner before using.
The increased use of Internet by the working class - It is an obvious fact that today most of our corporate working class are using the email facilities for communicating. This has also resulted in the spread of computer viruses. Email servers that do not have updated firewalls have become vulnerable to viruses attacks. This is very critical because emails can be sent to many contacts at a single click. Supposing there is a virus attached, unsuspecting victims will be infected upon downloading the infected attachments.
The introduction of Telikom PNG’s VSAT and Broadband Technology - These are state-of-the-part modern day technology that will definitely lift PNG to a higher level in ICT. With the use of this technology precaution must be taken against computer viruses. Users must be prepared to counterattack computer viruses on a larger scale with the use of this technology. In traditional Internet dial-up technology the speed is 56Kb/s while with the VSAT you experience speeds from 1 MB/s up to 2 GB/s range depending on customer preferences. These speeds have enabled PNG to be opened up to high speed data freeways making our networks vulnerable to virus attacks.”

He said symptoms that showed a user that his computer was infected were:
The Home Page on the Internet browser changing;
CD Drive opens and closes unexpectedly;
Strange behavior is noticed- applications not responding, Explorer blinks or goes off, start menu pops up and goes off continuously;
· Folders in the USB drive are hidden
· Mouse pointer moves without you pointing the mouse;
· Office documents change their extension form, for example, from doc, xls, etc, to exe.
· Strange pop-ups are experienced;
· Computer suddenly logs off and displays a blue screen;
· You log into Windows and it logs off again;
· Your computer suddenly becomes very slow; and
· Your anti-virus cannot start up or is disabled.

The PC Clinic deals with detection, removal and monitoring of computer viruses and also provides anti-virus installations for WAN and LAN Servers.

Email ThisBlogThis!Share to TwitterShare to FacebookShare to Pinterest
Labels: virus