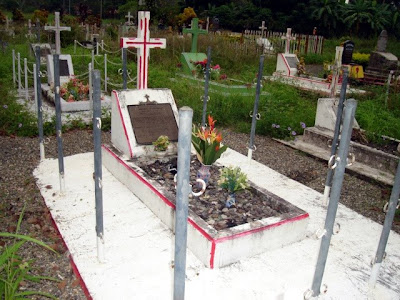 There are some things in life that are so hard to comprehend.
These things make you wonder why some people have the audacity to carry out such acts, which include desecrating the memory of loved ones that families and relatives have laid to rest. These people can stoop as low as stealing brass plaques from graveyards to sell to unscrupulous scrap metal dealers for a fast buck.
In my home town of Lae, this practice has been going on ever since these dealers - who prey on Papua New Guinea's massive unemployment problem - set foot.
Today, a visit to cemeteries in Lae, will show you many headstones on graves that are missing brass plaques.
A case in point is the old graveyard up the road from the famous old Lae airport.
This graveyard is the final resting place for many of the pioneers of Lae and Morobe province, mainly expatriates, and was a relic of a bygone era where visitors could learn so much just by reading the plaques and headstones.
Rest In Peace - RIP - those buried here are supposed to be.
However, this has not been the case over the last 10 years or so, as grave robbers without a care in the world have plundered basically all the brass plaques.
In my younger days, as a journalist in Lae, one of my hobbies used to be wandering old graveyards and reading the plaques and headstones as I could learn so much history. Sadly, I can no longer do this, as many of the plaques are gone.
And the irony is that people are not making any noise about this daylight robbery going on in front of their own faces.
The grave robbers are desecrating graveyards at the old Lae airport, Second Seven (Malahang), and even my Butibam village, to name a few.
Heaven knows what would happen to the Lae War Cemetery if there wasn't tight security around to prevent these intruders.
We never thought that this practice would come to Butibam until a few years ago when plaques started disappearing overnight.
In May 2006, while on a working trip to Lae, I visited my father's grave at Butibam and took pictures.
A short time later, I was surprised to receive a call from my mother, who was in tears as she told me that Dad's plaque had disappeared to these unprincipled grave leeches.
The entire family, just like me, was shocked as we wondered what exactly Dad or we had done to deserve this.
The plaque, to this day, has not been replaced as I somehow have to find the exact wording for a replacement.
My father, the late Mathias Nalu, died on September 17, 1993, after more than 35 years of service with the Education Department as a teacher and later a school inspector.
He had just retired and received his final entitlements, however, never got to enjoy the fruits of his labour as he suffered a severe stroke from which he never recovered until his untimely passing.
Dad was one of those old Dregerhafen and Finschhafen boys who was always proud to call Michael Somare, Paulias Matane, the late Alkan Tololo, and many more, "old school mates".
Dad's school mates went on to become great leaders of this country while he chose to take the backseat as a humble teacher and school inspector.
Hundreds of teachers and public servants packed the St Andrew's Lutheran Church at Ampo in Lae for his funeral service.
The Nalu family was humbled by this show of respect from so many people from all over Lae, Morobe province, and PNG.
I realise that times are hard, but to steal brass plaques from graves to sell to some dodgy scrap metal dealer for a quick buck is unforgivable.
The government should put in place tough legislation to combat those who steal plaques from graves and those who buy them.
These offenders, as part of their rehabilitation, could be sent to Salamaua where the villagers there will teach them how to look after and respect old graveyards.
The old Salamaua cemetery is a relic of a bygone era of the 1920s and 1930s when fevered gold miners from all over the world converged on this idyllic part of the world.
To visit the old Salamaua cemetery is to step back in time, to a rip-roaring period when gold fever struck men from around the globe.
Today the old Salamaua cemetery, or what remains of it, is well tended to by the local villagers.
The graves are mute testimony to the days when European man, running a high gold fever, was claimed by a fever of a different kind.
I have a very simple message for those who removed my father's plaque and those who bought it.
"May God forgive you.
"I find it very hard to do so."
Posted by Malum Nalu at 7/20/2008 12:02:00 PM