History being rewritten with Bulolo Airport 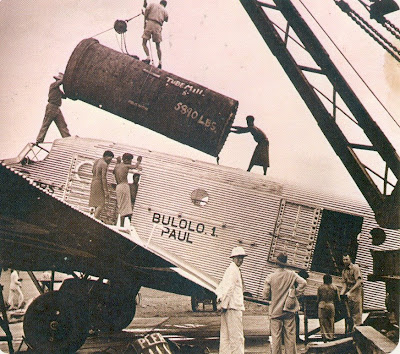 Many people who have been long fascinated by the story of the gold rush days of the 1930’s feel that history is being rewritten with the re-opening of the Bulolo Airport.
The greatest airlift the world had ever known started from Lae to the Bulolo goldfields in the 1930s.
Built in June 1930, originally the Bulolo strip was 1,150 yards by 120 yards.
Later it was expanded to 1,300 yards in length, covered with grass.
This airstrip was used in conjunction with flying supplies and equipment for gold dredging at Wau and Bulolo.
On January 21, 1942, Japanese Zeros and bombers attacked Bulolo.
At Bulolo, they set fire to three of the Junkers G31 tri-motors on the ground, destroying them.
Gold dredging work ceased as most of the men employed entered military service.
Five days, later, on February 5, 1942, Bulolo was bombed at 11am by five twin-engine bombers.
The discovery of gold at Edie Creek above Wau in 1926 sparked off a gold rush which led to the exploitation of the rich deposits of the Bulolo-Watut river system by large-scale mechanised mining.
The rigours and cost of the eight-day walk into the goldfields and the difficulty of building a road from the coast led to the early introduction of an aviation service.
The driving force behind the development of the goldfields was Cecil J. Levien, a former Morobe District Officer, who has been described as a “rare and formidable combination of opportunist, practical man and visionary”.
Levien persuaded the directors of Guinea Gold N.L. that startling profits would be made by any aviation company that could provide a service to eliminate the arduous walk between Salamaua and Wau.
He secured an option on a small DH-37 plane in Melbourne and engaged a pilot, E. A. “Pard” Mustar, to bring it to New Guinea.
The aviation service was a success from the start.
After two unsuccessful flights around the mountains south of the Markham no one knew exactly how to find Wau from the air.
Mustar landed at Wau for the first time on April 16, 1937.
He began the service the next day with a shipment of six 100 lb bags of rice, charging a shilling a 16, and, making two trips a day, five days a week, carried 84 passengers and 27, 000 lbs of cargo in the first three months.
Rival aviation companies were not long in arriving to share the profits.
Ray Parer, the proprietor of Bulolo Goldfields Air Service who had been competing keenly with Mustar to be the first to land at Lae, came from Rabaul after many delays, and A. “Jerry” Pentland and P. “Skip” Moody soon joined them.
There was ample business for all, and by April 1928, a year after the service began, Guinea Airways (the aviation company that grew from Guinea Gold N.L.) had acquired two extra planes and was employing three further pilots and two more mechanics.
Then in March 1929 a new company, Morlae Airlines, began a weekly Lae-Port Moresby run, meeting ships from Australia and bringing passengers and frozen foods across to Wau, Bulolo, Salamaua and Lae.
At first Bulolo Gold Dredging Ltd and its parent company, Placer Development Ltd, had thought of building a road to the goldfields, but the length of time it would take and the high cost of construction and maintenance persuaded the companies to accept Guinea Airways' proposition that “skyways are the cheapest highways”.
On the advice of Mustar, Bulolo Gold Dredging purchased three all-metal, tri-motored Junkers G-31 aircraft from Germany, which Guinea Airways was to operate under licence for the gold mining company.
Guinea Airways also purchased a Junkers G-31 of its own.
They were huge planes, each capable of carrying a payload of 7100 lbs or 14 short tons together.
The airlift began in April 1931 and continued for eight years: the first dredge began work in March 1932, the eighth in November, 1939.
Another crane at the airstrip lifted the heavy machinery into the planes and a rail crane unloaded them at Bulolo.
Eventually operations became so efficient that nine round trips a day were possible.
The airlift was a remarkable undertaking.
It pioneered the use of aviation in the transport of heavy cargo and, in the words of one writer, “in every respect it constituted a world record”.
Posted by Malum Nalu at 7/20/2008 11:30:00 AM