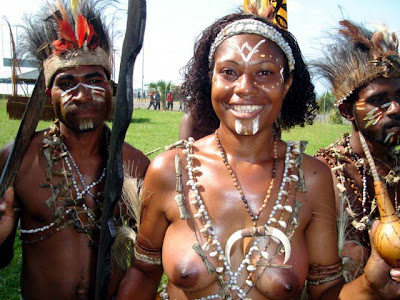 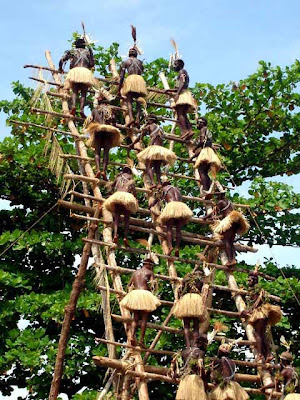 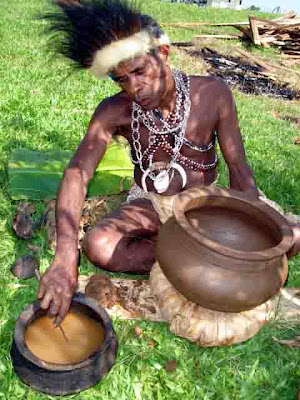 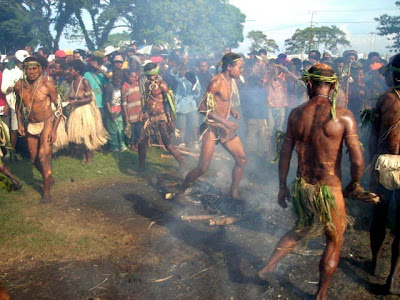 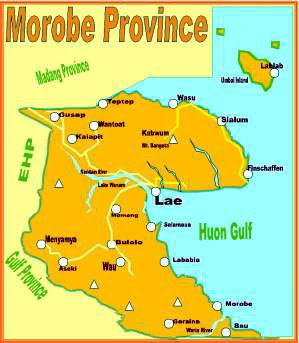 A singsing group dancing on a very high platform?

And members of another jumping into the live embers of a fire, picking them up, and chewing the still glowing coals with their mouths?

No, this wasn’t a scene from Ripley’s Believe It Or Not!

The Popof Village Tree Dancers from the Nawaeb District actually performed on the steps of a very high platform.

And the Danga Village Fire Eaters from the Bulolo District actually ate fire, much to the disbelief of the crowd.

From arts and crafts, singsing groups, and theatre groups to beautiful young women from all parts of the province, the inaugural Morobe Biang Ngayam Festival had it all.

The Sir Ignatius Kilage Stadium in Lae was chock-a-block from May 24 to 27, 2006, as thousands from all corners of Papua New Guinea’s most-populous province converged there.

That year the Morobe Provincial Government and the people of Morobe Province embarked on this second cultural show to promote, preserve and showcase the rich and diverse culture of the province.

A first cultural festival was held at the Sir Ignatius Kilage Stadium in 1998 but went into hibernation for the last seven years simply because of the “no funds” excuse.

The project – aptly named Biyang Ngayam Festival – was collaboration between the Tourism, Culture and Sports Division of the Provincial Administration; educational institutions; the private sector; and the local community.

Biyang Ngayam is a fusion of two of the province’s major languages – Kote and Yabim – and means “good day” or “something good”.

It was the perfect opportunity to learn, network and talk with the local community about arts, artifacts and culturally-related products.

I was in Lae on Friday May 26 and Saturday May 27, 2006, for that very reason – to collect information and photographs on Morobe arts and crafts for a forthcoming international online exposition in Chinese Taipei later that year – and wasn’t disappointed.

And, being a Morobean who had been away from home for a long time, I naturally got caught up in all the enthusiasm down at the stadium.

The theme of the 2006 festival was “Culture is the People” and the honour was attributed to the people whose lifestyle shapes the culture of the Morobean society.

The four-day festival showcased the importance of the lifestyle of the Morobeans, which forms the very core of Morobe Province’s culture.

It aimed to achieve the following objectives:
Showcase the cultural heritage of Morobe Province through dances/singsing groups, artifacts/handicrafts, and promote culture through theatrical developments;
Revive the cultural tradition and lifestyle of the Morobeans; and
Promote and establish understanding among the Morobe communities to maintain, protect and preserve its unique cultures.

“The unique cultural heritage of Morobe Province is a pot of gold and if given the highest attention, will generate enormous employment and revenue for the province in years to come,” said veteran Morobe Administrator Manasupe Zurenuoc.

“This event must be seen in the context that it is a great substitute for the non-renewable sector of the economy.”

The event was opened by Governor General Grand Chief Sir Paulias Matane on May 24, 2006, and closed by Deputy Parliament Speaker and Kabwum MP Bob Dadae on May 27, 2006.

Prominent Lae businessman Fred Cook, a strong advocate of culture and tourism in the province, was chairman of the organizing committee.

“As far as I’m concerned, it was a wonderful success,” Mr Cook said.

“I don’t think that anywhere else in Papua New Guinea do we have such a diverse group of people.”

“I think that all the districts did a marvellous job in bringing the various dance groups to take part in the activities.

“I think they should all be commended for their efforts.

“As far as I’m concerned, I’ll be recommending to the provincial government that the festival should be an annual event.

“My reason is that if we want to have tourists coming, we have to have dates set every year.”

The climax was the crowning of the Miss Morobe Queen and the judges truly had an unenviable task on their hands, given the bevy of village beauties from all over the province.

Needless to say, it really came down to the wire, and the winner was Anne Kupu, a young village girl from Barang village on Siassi Island.

Runner-up was Ruth Jethro from Butibam village in Lae and second runner-up was Augusta Hagai from Morobe Patrol Post.

Email ThisBlogThis!Share to TwitterShare to FacebookShare to Pinterest
Labels: Memories of the Biyang Ngayam Cultural Festival