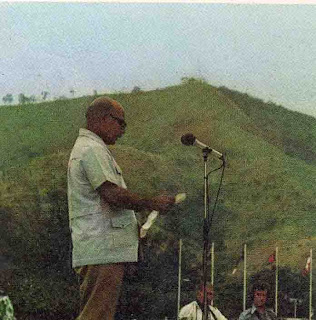 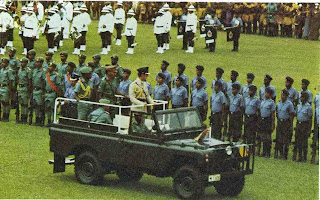 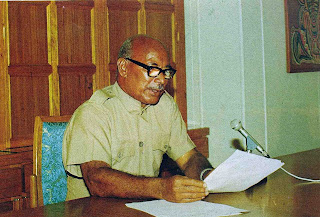 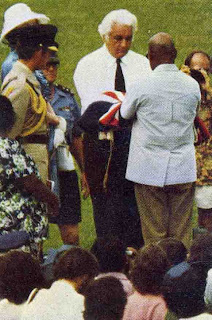 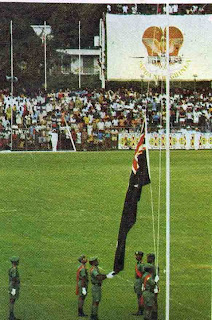 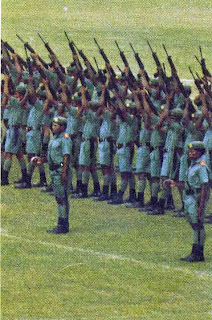 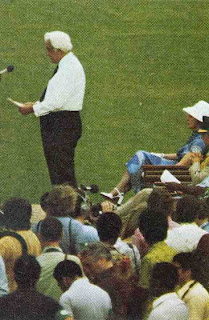 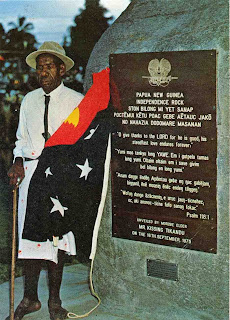 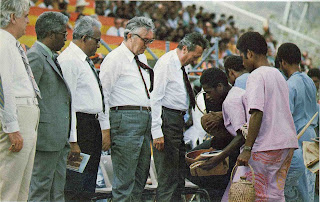 It was a truly moving ceremony and indeed a grand finale to Australian rule in Papua New Guinea.
Tears fell freely for many, a moment they shall never forget, as the Australian flag came down for the last time.
Just after 5pm on Monday, September 15, 1975, George Ibor, Warrant Officer, 2nd Class, of the 1st Pacific Islands Regiment, stepped into the centre of the Hubert Murray Stadium in Port Moresby.
A military band, accompanied by the percussion of a thousand clicking camera shutters, played “Sunset” as Warrant Officer Ibor lowered the Australian flag, folded it and handed it to Sir John Guise, the Governor-General of Papua New Guinea.
Australian colonial rule in Papua New Guinea had ended.
Sir John stressed that the flag was being lowered and not torn down, and that the years of transition from Australian rule to Independence had been happy and peaceful.
Sir John Kerr, the Australian Governor-General, taking the liberties with history that such occasions permit, asserted that Papua New Guinea and Australia had “by and large” worked in harmony, and had thus avoided the policies and relationships which had proved so tragic elsewhere.
At midnight on Tuesday, September 16, 1975, Governor-General Sir John Guise declared: “Distinguished guests, visitors from overseas, people of Papua New Guinea.
“Papua New Guinea is now independent. The constitution of the independent state of Papua New Guinea, under which all power rests with the people, is now in effect.
“We have at this point in time broken with our colonial past and we now stand as an independent nation in our own right.
“Let us unite, with the almighty God’s guidance and help, in working together for a future as a strong and free country.”
At one minute past midnight, fireworks resembling the twin plums of a Bird of Paradise heralded the start of a new day, a new era and a new Nation State.
Simultaneously, a 101-gun salute from HMAS Stalwart of the Royal Australian Navy occurred accompanied by HMNZS Tarenaki.
On the morning of the first day of Independence for Papua New Guinea, flag raising ceremonies took place throughout the nation.
The ceremony in Port Moresby was conducted at Independence Hill overlooking the main city centre.
International guests in national dress and western dress assembled for the occasion.
Former Administrators D.O. Hay and J.K. Murray, and former Minister for External Territories C.E. Barnes were among the spectators.
Prince Charles unveiled a plaque to mark the site of the new National Parliament building.

The Governors-General of Papua New Guinea and of Australia followed by the Commander of the Defence Force Ted Diro and Police Commissioner Pious Kerepia inspected the plaque, which was followed by the planting of trees.
The Papua New Guinea flag was presented by the Governor-General to the Commander of the Defence Force and the Police Commissioner.
It was placed over three drums from the 1st Battalion Pacific Islands Regiment Band and blessed.
The Flag Party and guards slowly marched up Independence Hill and hoisted the new nation’s flag above the plaque commemorating the ceremony.
Prince Charles later officially opened the First National Parliament of Papua New Guinea.
He read a goodwill message from the Queen, and officially opened the first National Parliament.
He looked to a future of promise, opportunity and individual freedom, and reminded the elected representatives of the great burden of responsibility which they had shouldered.
The action moved back to the Hubert Murray Stadium where a crowd of 14,000 witnessed a long and colourful ceremony during which the country’s political and legal leaders pledged their allegiance and loyalty to the Independent State of Papua New Guinea,
Governor-General Sir John Guise was sworn in by the Chief Justice of Papua New Guinea, Sir Sydney Frost.
Deputy Prime Minister Sir Albert Maori Kiki was sworn in by the Governor-General, and the Prime Minister Michael Somare signed a Declaration of Allegiance.
Members of Parliament were sworn in by the Governor-General.
Cultural aides from Sogeri Senior High School represented Papua New Guinea in a ceremonial gift exchange with representatives of many nations, international organizations and the United Nations.
Messages from many lands expressed goodwill towards, and recognition of, the new nation of Papua New Guinea.
Prime Minister Michael Somare held a press conference where he preached the virtues and necessity of “pulling up our socks” to a largely sockless nation.
He also stressed a commitment to self-reliance while Australian Prime Minister Gough Whitlam gave a “categorical and unequivocal” assurance that Papua New Guinea would have first call on Australia’s aid program.
Celebrations continued throughout the land.
On Wednesday, September 17, the Royal Australian Air Force and Air Niugini carried the Royal Party on its tour of five provinces throughout the mainland: East Sepik, Eastern Highlands, Chimbu, Western Highlands and Western.
People returned to their villages, put away their spears, kundus (hand drums) and bilas (finery) and recommenced the familiar daily round.
What would Independence bring to them?
Only time – now 33 years – would tell.
Posted by Malum Nalu at 8/07/2008 01:56:00 PM